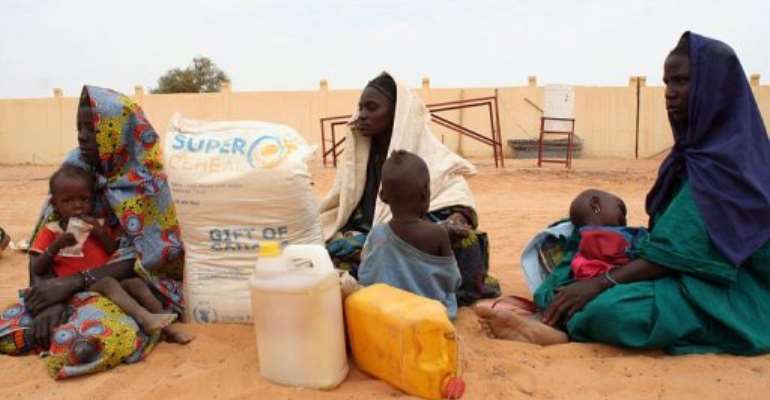 Women watch food being distributed by the UN World Food Programme near Timbuktu in December 2012. By Omar Barry (Islamic Relief/AFP/File)

GENEVA (AFP) - Tens of thousands of people who fled northern Mali are too scared to return despite the French-led military intervention to root out Islamist militia there, the Red Cross said Friday.

"There has not been a wave of returns, ... and I don't think there will be a wave of returnees any time soon," said Jean-Nicolas Marti, who heads the International Committee of the Red Cross' mission in Mali and Niger.

He said the continued unrest was discouraging many would-be returnees.

"There is also fear among some based on their ethnic identities of possible acts of retaliation by the Malian armed forces," Marti said, adding that he could not confirm that any such acts had taken place.

The UN meanwhile cautioned Friday that it had "heard horrifying reports from the north of human rights violations, recruitment of children and rising sexual violence."

"Protection of civilians is an urgent humanitarian priority, not least in terms of the risk of explosive remnants of war and mines," Jens Laerke, spokesman for the Office for the Coordination for Humanitarian Affairs, told reporters.

Tens of thousands fled northern Mali after Islamic extremists grabbed the vast territory last April, and tens of thousands more fled after the French-led intervention began in January to hunt them down, Marti said.

French-led forces wrested the main northern cities back from the Al Qaeda-linked rebels within weeks, but insurgency has continued.

A suicide bombing Thursday in Kidal in the far north and an attack by jihadists in Gao were signs that unrest still plagued the region, Marti said. Five people were killed Friday in two more suicide bombings in the town of Tessalit.

"Contrary to what some might have thought following French and Malian troops' recapturing of the main towns, the situation is not at all stable or calm," he added.

While the ICRC did not expect to see mass returns, Marti said lone family members would go back to check on their property and scout out the security situation, but these were only "return trips".

The ICRC was also concerned about the situation of prisoners, Marti said, pointing out that the organisation had visited prisons in Bamako and Mopti, as well as at the Gao police station.

While he could not reveal what they had found there, he said "the situation is worrying" and that the findings had been reported to the authorities.

"There is a lot of accumulated hate and tension," he cautioned.

The UN's children's agency meanwhile lamented Friday that the the crisis in Mali had disrupted schooling for some 700,000 children, with around 200,000 kids across the country without any access to schools.

"Since January 2012, at least 115 schools in the North were closed, destroyed, looted and in places contaminated with unexploded ordnance," UNICEF said in a statement.

"Many teachers have failed to return to the North and already overcrowded schools in the South cannot cope with the influx of displaced students from the North," it added.