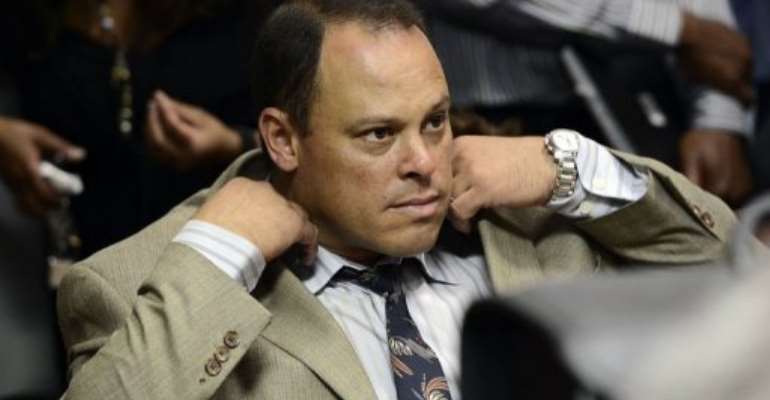 PRETORIA (AFP) - The lead detective in the murder case against Oscar Pistorius is himself facing attempted murder charges, police announced on Thursday, dealing a further blow to the prosecution's case against the star sprinter.

Police made the sensational announcement as Pistorius arrived for a third day of a bail hearing over the Valentine's Day shooting of his girlfriend Reeva Steenkamp, which prosecutors say was a premeditated killing and defence argues was an accident.

Lead detective Hilton Botha, whose testimony was challenged by defence attorneys on Wednesday, is facing seven attempted murder charges for shooting at a minibus taxi in 2009, police said.

"We were only informed yesterday that attempted murder charges against Hilton Botha have been reinstated," police spokesman Neville Malila told AFP, referring to the detective leading the investigation against Pistorius.

Pistorius's lawyers tore into Botha's police work during Wednesday's hearing, undermining his witnesses and forcing him to agree that the Olympian's version of events fitted the crime scene.

"It sounds consistent," Botha, a prosecution witness, told the court.

Pistorius vehemently denies the premeditated murder charges against him, claiming he mistook the 29-year-old for an intruder.

Despite gaining the upper hand on Wednesday, Pistorius's team still needs to give compelling reasons why he should be freed pending his trial, after having spent a week in detention already.

Charged with "premeditated murder", he has to prove exceptional circumstances that his release is in the interest of justice -- a high bar for bail.

Lawyers for both sides are expected to wrap up arguments for bail on Thursday.

If Pistorius is not granted bail he faces months and perhaps years in pre-trail detention.

Prosecutors are expected to say the global celebrity is a flight risk -- something he has denied and Magistrate Desmond Nair has appeared to question.

"Pistorius does not pose a flight risk, which is evident having regard to his international stature and exposure," his family said in a statement.

Thursday may reveal whether the Paralympic champion will also use disability as a grounds to argue for his freedom.

He runs on carbon-fibre blades, which inspired his nickname, after being born without the fibulas in both of his legs which were amputated below the knee when he was a baby.

"He's spent years telling the world he is able. What enables him to be able-bodied? Technology. Now if he finds himself without technology, is he able?" asked criminologist Laurie Pieters, who is not involved with the case.

Defence lawyers refused to comment on their tactics, saying the mystery around their arguments was intentional.

Experts speculated that Wednesday's events could have a significant bearing on the trial itself.

"This is a disaster for the trial and raises questions," said Frans Cronje of the South African Institute of Race Relations.

"They (the police) have been put on trial."

On Wednesday defence lawyer Barry Roux cast doubt on key witnesses who suggested a row between the couple before the shooting.

A woman who lives in the same highly secured complex as Pistorius "heard talking that sounded like non-stop fighting from two to three in the morning," hours before she was killed, Prosecutor Gerrie Nel said.

"Then he heard a female screaming two-three times, then more gunshots," Botha said.

But Roux disputed these accounts, as police said one witness was at least 300 metres (nearly 1,000 feet) from the house and the other had misheard the number of gunshots fired.

Pistorius' family was "satisfied" with the bail hearing, but "finds the contradictions in Botha's testimony extremely concerning," they said in a statement later Wednesday.

Botha was further forced to admit that police hadn't seen a bullet that hit the toilet basin in their investigation. The defence's forensic team discovered the bullet four days later.

He also conceded he did not wear protective clothing when Pistorius' forensic team visited the house, which may have contaminated the scene.

The first double amputee to compete against able-bodied athletes in the Olympics in London last year says he shot Steenkamp by mistake through a locked bathroom door, believing she was a burglar.

She had wounds to her head, elbow and hip.

Medics found her covered in bloodied towels and wearing white shorts and a black vest. She was declared dead on the scene.

Prosecutors later backtracked on the charge that a police search of Pistorius's home found testosterone and needles in a dresser in his bedroom.

"We can't tell what it is," said national prosecuting authority spokesman Medupe Simasiku later said. "We can't confirm or deny it until we get the forensic report."

The athlete, who off the track has had a rocky private life with stories of rash behaviour, beautiful women, guns and fast cars, has built up a powerful team of lawyers, medical specialists and public relations experts for his defence.

They have to neutralise his reputation for public outbursts and flirts with danger.

In 2009 he admitted to a newspaper that he slept with a pistol, machine gun, cricket bat and baseball bat for fear of burglars.

His career has been put on hold since the shooting, forcing him to cancel races in Australia, Brazil, Britain and the United States between March and May.

Two of his American sponsors, Nike and sunglasses maker Oakley, announced they were dropping Pistorius from their advertising campaigns, which have earned him millions of dollars in endorsements.