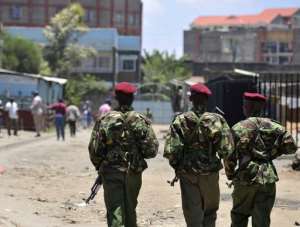 NAIROBI (AFP) - A soldier was killed and three people injured in a grenade attack in Kenya, police said Sunday, adding that the dead man was not a suicide bomber as previously thought.

An anonymous police official said earlier that the blast, which occurred in the northeastern town of Wajir on Saturday, was caused by a suspected suicide bomber who died when his explosives blew up before reaching his apparent target.

"It was not a suicide bomber as earlier thought," Charlton Mureithi, the regional police chief, said. "It was actually an attack on the officers."

Two police officers and one civilian were injured in the blast after attackers hurled the grenade at the soldier.

Military spokesman Bogita Ongeri confirmed that a Kenyan trooper had died in the blast. "We lost an officer during the attack," he said.

Attacks have increased in Kenya since Nairobi sent soldiers into Somalia to fight Al-Qaeda-linked Shebab insurgents in late 2011.

The violence has been blamed on the insurgents or their Kenyan supporters, who have vowed revenge.