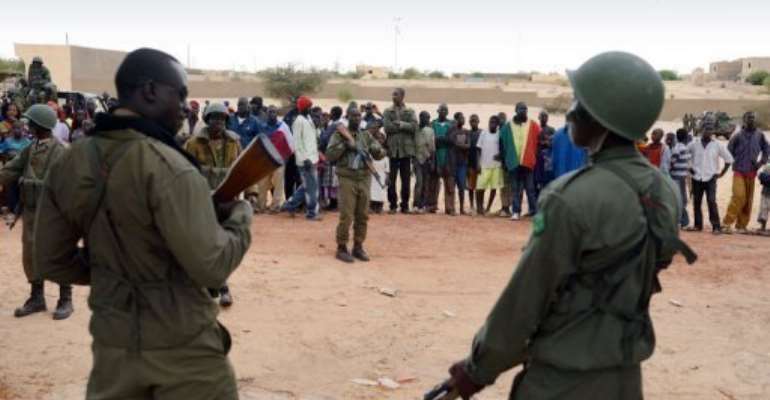 Residents welcome Malian soldiers as they enter the historic city of Timbuktu on January 28, 2013. By Eric Feferberg (AFP)

TIMBUKTU, Mali (AFP) - Malian troops cemented control of the ancient city of Timbuktu on Tuesday, as donors gathered in Ethiopia to drum up funding for the French-led offensive to drive radical Islamists from the rest of the country's north.

Life in the ancient city began returning to normal, as soldiers patrolled its dusty streets a day after receiving a rapturous welcome from residents who had spent 10 months under brutal sharia law imposed by the occupying insurgents.

Electricity and phone lines remained down, cut by the retreating Islamists, and residents faced a lack of food and water, pointing to a rising humanitarian crisis in Mali's semi-arid north where thousands have fled fighting.

The heavy humanitarian cost is only one of the concerns on the agenda of world leaders meeting in Addis Ababa to rally for money and troops for the 19-day old offensive to drive out Islamists who have occupied Mali's vast north since April 2012.

A woeful lack of cash and logistical resources has hampered deployment of nearly 6,000 west African troops under the African-led force for Mali (AFISMA) which is expected to take over the offensive from the French army.

So far, just 2,000 African troops have been sent to Mali or neighbouring Niger, many of them from Chad whose soldier contribution is independent from the AFISMA force. The bulk of fighting has been borne by some 2,900 French troops.

AU Peace and Security Commissioner Ramtane Lamamra said Monday the African force will cost $460 million (340 million euro), with the AU promising to contribute an "unprecedented" $50 million for the mission and Mali's army.

UN leader Ban Ki-moon warned ahead of the Addis Ababa conference there was a "moral imperative for the entire international community" to provide support.

The International Monetary Fund has agreed to provide an $18.4 million emergency loan to Mali.

In addition, Japan announced Tuesday it would give an extra $120 million to help stabilise the Sahel region, days after 10 Japanese nationals were killed in the Algerian hostage siege.

The donor conference opened a day after French-led forces marked up another victory in their lightning advance in Mali's north, seizing Timbuktu just two days after taking Gao, two of the three biggest northern cities.

"There were no shots fired, no blood spilt. Not even passive resistance with traps," Colonel Frederic Gout, head of French helicopter operations at the city, told AFP.

The far northern town of Kidal is the biggest goal remaining for the troops, and many of the Islamists who fled their strongholds before the soldiers arrived are believed to have melted away into the hills surrounding the town, 1,500 kilometres (932 miles) northeast of the capital Bamako.

Asked if French troops would press on to try to force the Islamists out of the mountainous north of the country, French President Francois Hollande said: "Now the Africans can take over...

"We know that this is the most difficult part because the terrorists are hidden there and can still carry out extremely dangerous operations, for neighbouring countries and Mali," he said from Paris.

Amid the euphoria over the French-led troops' victory in Timbuktu, shock spread over reports the fleeing Islamists had torched a building housing priceless ancient manuscripts dating back to the Middle Ages.

The town on the edge of the Sahara desert was for centuries a cosmopolitan trading crossroads and centre for Islamic learning.

Timbuktu mayor Halley Ousmane, speaking from the capital Bamako, confirmed accounts of the fire at the Ahmed Baba Centre for Documentation and Research.

"It's a real cultural crime," he said.

Set up in 1973, the centre housed between 60,000 and 100,000 manuscripts, according to Mali's culture ministry. However experts believe many of the documents may have been smuggled out and hidden when the crisis began.

Radical Islamists seized Timbuktu 10 months ago as they took control of Mali's desert north in the chaos that followed a military coup last March.

They forced women in Timbuktu to wear veils, and those judged to have violated their strict version of Islamic law were whipped and stoned. The militants also destroyed ancient Muslim shrines they considered idolatrous.