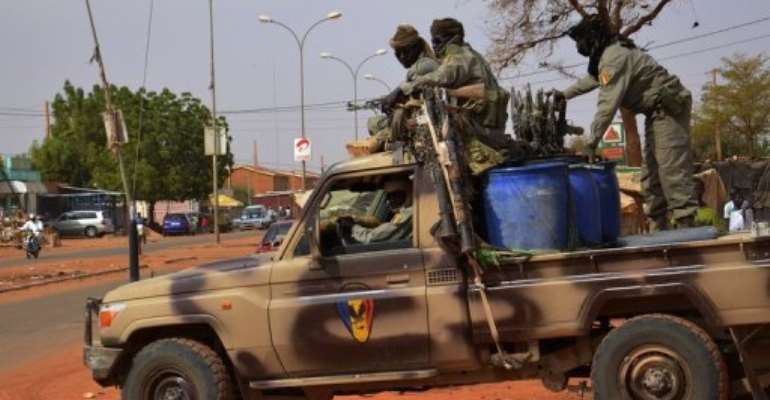 Soldiers from Chad leave Niamey for the Malian border on January 26, 2013. By Boureima Hama (AFP)

ADDIS ABABA (AFP) - The war against Islamist militants in northern Mali including the deployment of African troops is expected to dominate talks at the African Union summit in Ethiopia opening Sunday.

A scaling-up of African troops is intended to support the weak Malian army -- boosted by the recent French military intervention -- to battle Islamist insurgents, who seized swathes of Mali's desert north following a coup last year.

The AU has said the priority is to send troops immediately to the embattled West African state.

"The goal is to do it I would say yesterday, as soon as we can," AU Deputy Peace and Security Commissioner El Ghassim Wane told reporters on Thursday.

African leaders are set to commit their support for the force, with presidents expected to also stay beyond the two-day summit for an international donor conference for Mali.

The conference on Tuesday will aim to drum up further funds for Mali operations and will include representatives from the European Union and the UN Security Council.

Wane said he was confident the donor conference would "deliver on its promise" and secure the necessary resources, including the swift deployment of troops and support for Mali's army.

But during the first bi-annual summit since the election of AU Commission chief Nkosazana Dlamini-Zuma, the 54-nation AU, with UN chief Ban Ki-moon in attendance, will also likely focus on other flashpoint areas.

"We have seen the re-emergence of conflict in the eastern Democratic Republic of Congo, Guinea Bissau and the Central African Republic," Dlamini-Zuma told reporters this week.

"In Mali and the Sahel we are now facing new, multi-faceted challenges with broader regional and continental implications," she added.

Another topic would be the slow progress between the rival leaders of Sudan and South Sudan, who are due to meet Friday for the latest attempt to push forward a raft of stalled oil, security and border deals.

Vines said a strong commitment from both presidents is required to revive the AU-mediated negotiations, which began after Juba won independence in July 2011.

"These are things that will require a compromise at senior political level, so hopefully a meeting of both presidents will assist the AU mediation team in pushing for progress," he said.

Dlamini-Zuma has urged member states and the international community to work together to address conflict, and insisted that peace is crucial for development on the continent.

"It is my fervent hope that we maintain a proper and healthy balance between achieving peace and advancing development.... The continent cannot advance without succeeding on both fronts simultaneously," Dlamini-Zuma added.

The conference, which is officially themed "Pan Africanism and African Renaissance", will also kick off the 50th anniversary celebrations of the founding of the Organization of African Unity, the predecessor to the AU.

Dlamini-Zuma has said the anniversary was time to ensure the "social and economic liberation of our continent".

African leaders are also set to vote in a new chair of the AU to replace the current head, Benin's President Yayi Boni.

The position rotates on a regional basis and a new chair is voted in by member states every January.