Why Martin Amidu was sacked; the Inside Story 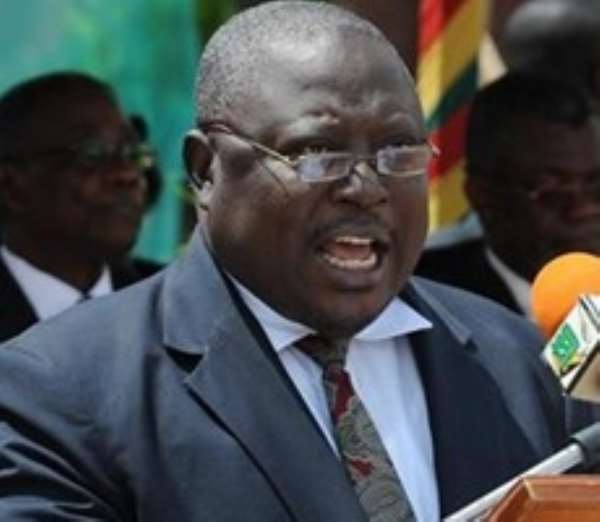 Since Martin Amidu was sacked from his position as Attorney General and Minister for Justice, several explanations, sometimes contradictory, have been given for his dismissal.

The official explanation contained in a statement signed by the Chief of Staff said Mr Amidu misconducted himself at a meeting with the President, a claim Martin Amidu denies.

Martin Amidu, who christened himself the “Citizen Vigilante” after his removal from office has been very critical of the NDC government occasionally issuing statements bordering on corruption in the government.

In Thursday's edition of Daily Guide, a paper critical of the ruling government, carried what it called the Inside Story of why Mr. Martin Amidu was sacked.

Read below Daily Guide's reasons why Martin Amidu was sack.

Why Martin Amidu was sacked-The Inside Story

Information available to Daily Guide indicates that the former Attorney General, Martin ABK Amidu, was sacked by the late President John Evans Atta Mills because he insisted on the prosecution of some government officials over financial malpractices, to the chagrin of the now deceased First Gentleman and tile NDC leadership.

''The Deputy Attorney-General was instructed by the President to take control of the three dockets which he did on 22nd July 2011 from the DPP's office to prevent prosecutions" was one of the telltale aspects of the correspondences from Mr. Martin Amidu to the Chief of Staff, copies of which are available to Daily Guide.

Some of the government officials Martin Amidu went after included the Ag Chief Fire Officer who, among others, was involved in a financial malfeasance over the purchase of 10 firefighting motorbikes and some of his colleagues in the NDC administration over the Woyome payments.

The revelation throws overboard the much-touted misconduct charge leveled against the former Attorney General by the Chief of Staff and amplified by the Martin Amidu-christened rented press.

While President Mills stood against the prosecution of the cases, Martin Amidu insisted on going ahead, culminating in his boss showing him the exit.

Before the final decision to dispense with his services, Martin Amidu, Henry Martey Newman, Chief of Staff, J.K. Bebaako Mensah, Secretary to the President, Koku Anyidoho and the President were locked up in a crucial meeting over three issues, one of which was the Alfred Woyome debacle.

A £12million International Finance Corporation, facility for a Ghana Oil Palm Development Corporation project had vanished or did not make it at all to the intended vaults in Ghana, suggesting malfeasance involving some Ghanaian government officials.

The forensic audit of the suspected malfeasance led to n the production of a docket which was submitted to the then Attorney General, Martin Amidu, who set about to prosecute a number of government officials and private personalities found culpable.

He was stopped from proceeding through the intervention of the then Governor of the Bank of Ghana now Vice President Kwesi Bekoe Amissah- Arthur, to the chagrin of Martin Amidu.

He did this by prevailing upon the late President to stop Mr. Amidu who counseled his boss about the oddity of shelving the docket, given the fact that criminal cases have no expiry date and some detectives have copies of the docket.

The second case had to do with the purchase of some firefighting equipment which was riddled with procurement law breaches and therefore making way for some form of malfeasance by some officials.

Expectedly, the Police moved in, producing a docket indicting some government officials including the Ag. Chief Fire Officer but Mr. Amidu's decision to prosecute was blocked.

Also discussed was the issue of indemnity for the EO Group but which Mr. Amidu demurred and incurred the wrath of the late President.

Mr. Amidu, a whistle-blower with the street name 'Citizen Vigilante,' enumerated the foregone in a correspondence to the Chief of Staff and copied to the UN Resident Representative in the country.

In the covering letter of the same date, he stated, "I am attaching herewith my response to Mr. John H.M. Newman, the Chief of Staff's press release of 19th January 2012 alleging that H. E. the President's letter of even date to me relieving me of my position as Attorney-General and Minister of Justice constituted a dismissal for misconduct."

He stated, "I have decided to send you a copy of the letter for the avoidance of any doubt that H.E. the President will know my reaction to the press release of the said John H. M. Newman which is inconsistent with the letter from the RE. the President relieving me of my position and Articles 3 and 88 of the 1992 Constitution.

"This notice to you is very important to me because you are privy to my letter No. D45/SF. 173/1 0 dated 6th January 2012 on 'Why the Government... must set aside the default judgment. .. ' in the Woyome case which demonstrates 'my consistent efforts to protect and defend the President, the Government and the Constitution of Ghana."

The correspondence stated, "A publication of this letter by the Government in the public interest will protect the President and the Government, restore my assassinated integrity, and expose the lies of the Chief of Staff, John H.M. Newman, who was a recipient of my said letter of 6th January 2012."

The foregone was also copied to H.E. Ruby Sandhu Rojon, the UN Resident Coordinator/Resident Representative, Office of the United Nations in Ghana, Accra.

In the 20th January 2012 letter addressed to the Chief of Staff, Mr. Martin Amidu referred to the President's letter relieving him of his position and pointed out that "the only reason given by H.E. the President was that: 'it is my view that your conduct during the meeting in my office on Friday, 13th January, 2012 constituted an affront to the dignity of the high office of the President.' H.E. the President is entitled to be prosecutor, judge and jury in his own cause! I have no problem with that."

He added, "I, however, have a problem of integrity with your press statement which tells the whole world that my undisclosed conduct was misconduct without disclosing particulars of the misconduct."

Mr. Amidu explained that his action was in consonance with the terms of his oath of office to defend the independence and impartiality of the Office of the Attorney General as contained in Article 88 of the Constitution.

That, he said, could not constitute misconduct or an affront to the dignity of the high office of President.

Martin Amidu recalled one of his letters in which he raised the issue of financial practices and how "the Deputy Attorney General was instructed by the President to take control of the three dockets which he did on 22nd July 2011 from the DPP's office to prevent prosecutions".

He said he joined the government at the request of the President because of his long standing relationship with him, dating - back to when he was enrolled as a lawyer.

He referred the Chief of Staff to a letter he sent to the Interior Minister dated 8th March 2011I in which he stated, "I have a parting thought: It is our constitutional duty as ministers of this Republic to uphold the truth and defend justice to the end that we save our party and Government from any embarrassment even to the peril of our being dismissed from office than to keep quiet for our party and Government to be damned by timidity."