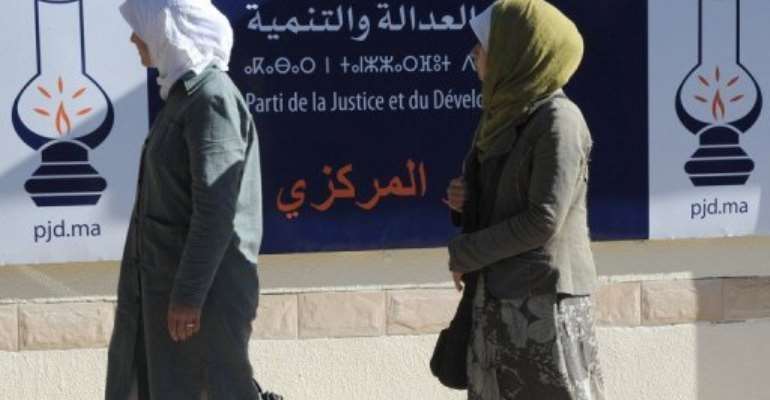 Two veiled members of the Justice and Development Party (PJD) party walk past a PJD campaign poster in Rabat. By Abdelhak Senna (AFP/File)

RABAT (AFP) - The closing ceremony of a youth congress for Morocco's ruling party went ahead in Tangier on Sunday, a day after being banned for security reasons, a senior party official said.

Prime Minister Abdelilah Benkirane attended the conference of his Justice and Development Party (PJD), urging delegates to "continue to campaign" in the face of challenges, said the PJD's Abdelaziz Rebah, who is also transport minister.

"The closing ceremony which was to have been held outdoors in a small square of Tangier was transferred to a covered room to allow thousands of youths to follow its progress," Rebah told AFP.

"Its transfer was motivated strictly by security measures and not for political reasons. Police had feared excesses given the large number of participants," he said.

At the closing ceremony, Benkirane called on the youths "to continue to campaign for the national fundamentals, which are Islam, the unity of the country and the monarchy."

"We must continue our efforts to meet the challenges and crisis. Despite this crisis, we must be optimistic," said the prime minister, quoted by Rebah.

An interior ministry official told AFP on Saturday that the ceremony had been banned for "security reasons."

PJD delegate Abdelaziz Aftati had described Saturday's move to ban the ceremony as a "humiliation for our party," adding that "we must not stand by with our arms folded."

Another senior party member, Abdelali Hami al-Din, had said the authorities' decision to halt the event was taken in "revenge for the work of the conference."

More than 2,000 youths had gathered last week in Tangier, where several speakers had criticised the king's entourage, accusing it of "being the shadow government," according to participants.

Rebah described the congress as a "success," but during their discussions at the gathering, the youths at times criticised their own government, including over the fight against corruption.

Census: People suspect us to be armed robbers, some attack u...
18 minutes ago