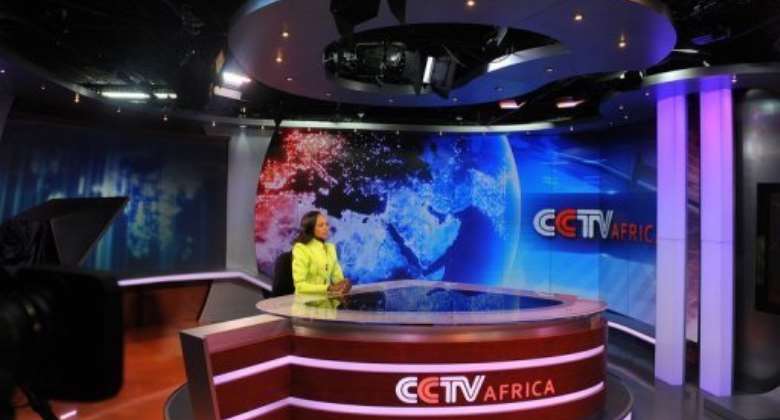 Nairobi was CCTV's first regional bureau to produce and broadcast its own hour-long news programme. By Simon Maina (AFP/File)

NAIROBI (AFP) - The countdown starts and the Kenyan news reader runs through the top headlines for the evening bulletin. In a few minutes he will go on air in Nairobi, broadcasting live for China state television.

It's 8:00 pm in the Kenyan capital and 1:00 am in Beijing, when China Central Television (CCTV) hands over to its Nairobi team for "Africa Live", an hour-long flagship programme billed as a "new voice" for African news and Sino-African relations.

On a recent night, the spotlight was on Rwanda's economic expansion and the Somali athletes taking part in the Olympics in London.

"We want to keep a balance," Pang Xinhua, CCTV's managing editor who runs a network of correspondents in a dozen African countries, told AFP. "We are not only talking about war, diseases or poverty, we also focus on economic development."

"Africa Live" is put together by a team of 60 or so people in Nairobi -- about 50 of them Kenyans. It holds a prime time slot in east Africa but is also televised worldwide.

"We opened this bureau in order to be able to tell the real Africa story, the real story of China and the real story of Sino-African relations," CCTV Africa chief Song Jianing said, echoing remarks by China's ambassador to Kenya when the switchover started in January.

For its inauguration, CCTV Africa managed to get Kenyan Vice President Kalonzo Musyoka to make a speech.

He urged the channel to "present a new image of the continent" to break with the trend in which Africa is often shown in the international media as "the continent of endless calamities".

Chris Alden of the London School of Economics said CCTV Africa is "part of a wider strategy to combat what can be seen as a negative relationship" between China and Africa.

"Chinese officials start from a diagnosis that too many Africans rely on Western-based news services," said Alden, who is certain CCTV "will have an impact."

"Where there is deep unhappiness among local African businesses experiencing displacement due to competition from Chinese companies, it won't eliminate that, but it could lessen a negative effect," he said.

"It's also ... for Chinese people to get a better understanding of Africa," he added, saying events like last year's Libyan conflict in which 30,000 Chinese had to be evacuated by Beijing "have an impact on Chinese investments in Africa."

For David Bandurski of the China Media Project at Hong Kong University, CCTV Africa is part of China's bid to beef up its "soft power" strategy, a notion that first emerged with President Hu Jintao in 2007 and aims to win influence abroad by appeal and exchanges rather than threats or force.

Other pundits point to the media's role in this.

"China has sent its state media on a global mission to advance its influence in the world," said Yu-Shan Wu from the South African Institute of International Affairs, in a recent paper noting that Beijing's efforts "previously focused on trade, investment and diplomatic activities."

And this mission is not limited to CCTV and its Africa broadcasts. The Chinese TV giant also has programmes in French, Spanish, Arabic and Russian, while the state news agency Xinhua is also expanding worldwide.

CCTV Africa, meanwhile, insists that it wants to present the world through an African prism.

"The thing I like is that we are telling the story from our perspective," said Beatrice Marshall, a star news reader at the Kenyan station KTN who was wooed over to CCTV Africa.

"When you go to rural Kenya now, you see that everyone can watch TV, listen to radio, people are more educated and we want to talk about that," she told AFP.

On the delicate issue of whether Beijing censors content, Douglas Okwatch, editor on the Saturday "Talk Africa" programme presented by Marshall, said staff have a free hand on their stories "as long as they are objective, balanced and not dragging in unnecessary controversies."

"One thing they (CCTV) are doing right," analyst Wu told AFP, "is to provide a platform for Africans to speak their point of view.

"On other channels, I don't find such platforms to speak on Africa by Africans," she said, but questioned how CCTV Africa will fare if it emphasises only the upside of Sino-African relations.

"Credibility is not covering only the positive stories," said Wu.

Hong Kong University's Bandurski, meanwhile, said CCTV news products "must be subjected to political controls, even if these controls are not necessarily as rigid as those imposed on domestic Chinese media."

But he agreed it will be "very difficult to build a credible international media when you do not have sufficient leeway to produce truly professional coverage."

CCTV Africa chief Song, whom the staff all call "Madame Song", insists that Beijing has not rejected any content so far, and hopes soon to add a second hour of programming out of Nairobi.

And at a time when many Western media houses are struggling to survive, the Chinese TV giant has the means to finance its expansion projects.

CCTV aims to rank among "the biggest media groups in the world", said Song.

The channel we used was the same channel Joy FM used to get ...
29 minutes ago