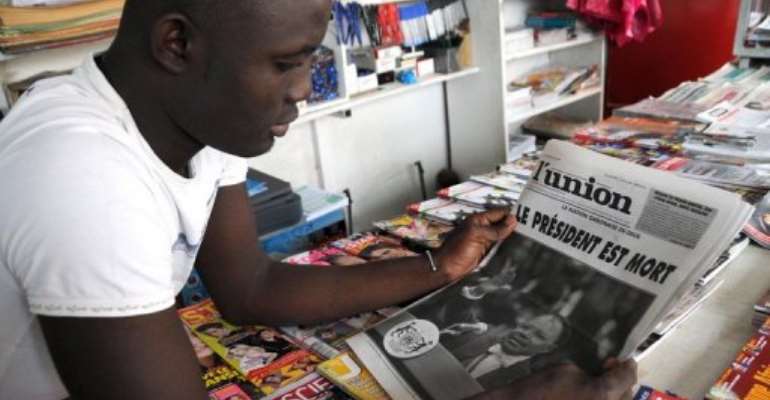 A young man reads a newspaper in Gabon. By Wils Yanick Maniengui (AFP/File)

LIBREVILLE, Gabon (AFP) - Two opposition newspapers have been suspended for six months in Gabon for not respecting "the institutions of the republic", Gabon's National Communications Council (CNC) said Saturday.

"The CNC finds that ... Enzombolo and La Une persistently disrespect the institutions of the republic and the people who represent them," and would be suspended for "six months", said a statement from the media regulatory body.

The suspensions come after the Ezombolo paper likened Gabon's President Ali Bongo Ondimba to the plump character used by the tyre firm Michelin as its trademark and called for the army to revolt.

The Enough is Enough civil society opposition group said the CNC had gone too far.

"This suspension is one too many. It just happens randomly whereas the pro-government press, in every one of its publications, never worries about dragging any sort of protest through the mud," the group said in a statement.

In January another paper and a television channel owned by Bongo's main opponent Andre Mba Obame were temporarily suspended after broadcasting New Year's greetings from Obame, who proclaimed himself president in January 2011.

Bongo subsequently called for firmer action from the CNC.

"While I support freedom of expression, I still call for more vigorous action ... against these transgression," he said.