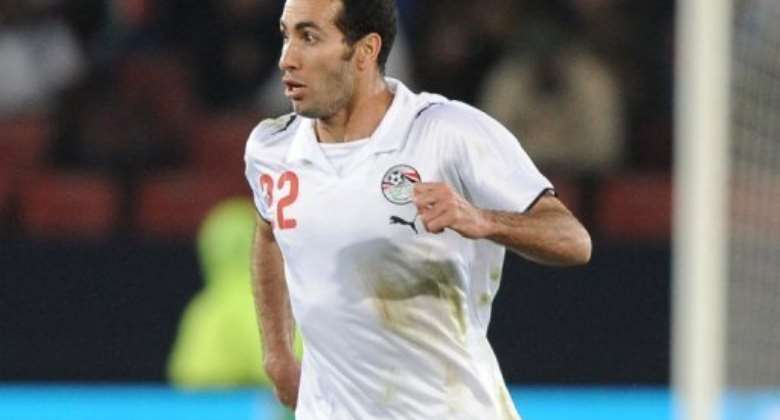 JOHANNESBURG (AFP) - Egypt are long overdue a good run at the Olympics football tournament and hope Mohamed Aboutrika can be the catalyst for a medal-winning showing in London.

The Pharaohs have qualified 12 times without any gongs to show for their efforts with the best performances being fourth-place finishes in Amsterdam in 1928 and Mexico City 40 years later.

Aboutrika, a 33-year-old midfielder from famous Cairo club Al Ahly, will captain Egypt and he, defender Ahmed Fathy and striker Emad Meteab, are the three over-age players in the under-23 squad.

Instead of his usual No 22 shirt, Aboutrika will wear the No 5 as a tribute to Zinedine Zidane, the former France star who is idolised by the Egyptian playmaker with a fondness for goals.

Egypt have a challenging first-round mission, which starts against tournament co-favourites Brazil in Cardiff on July 26 and continues against New Zealand in Manchester and Belarus in Glasgow.

Brazil, whose footballers have never won Olympic gold, are the obvious choice to top the table and who joins them in the quarter-finals could well be settled at Hampden Park on August 1 when Egypt meet Belarus.

Among the greatest African footballers never to play for a European club, Aboutrika was initially reluctant to appear at the Olympics, saying he did not want to take the place of an under-23 footballer.

But Olympic team coach and former Ahly, Werder Bremen and Egypt defender Hani Ramzy persuaded the Cairo University graduate with a bachelor of arts degree in philosophy that his country needed his talents.

"It is an honour for me to represent my country in such an important event," Aboutrika told reporters. "I cannot turn down an invitation to play for the national team."

The over-age-players rule did not apply to qualifiers, but Egypt and fellow African challengers Gabon, Morocco and Senegal have taken advantage of the opportunity to bolster squads with experienced stars.

Aboutrika joined unfashionable Cairo club Tersana (Arsenal) as a 12-year-old, was promoted to the senior squad at 19 and moved to Egyptian and African club football giants Ahly in 2004 when 26 years old.

He has been with the Red Devils since, helping them win many international and domestic trophies, and also became an automatic choice in the national squad since making his debut eight years ago.

A tall, pencil-slim figure with dark close-cropped hair who is married and has three children, Aboutrika combines his ability to control midfield with an uncanny knack of scoring key goals.

This was never more evident than last May when Ahly were trailing 1-0 on the night and 2-0 on aggregate against Malian visitors Stade Malien in a final round eliminator for the 2012 CAF Champions League.

Aboutrika staged a one-man salvage operation, scoring from a free kick and a penalty before rifling the ball into the net from close range as time ticked away to secure a place in the group phase for the six-time African champions.

Loathe to discuss his achievements, Aboutrika had a particularly memorable 2006, starting with his successful conversion of the shootout penalty that enabled Egypt to lift the Africa Cup of Nations at the expense of Ivory Coast.

Many months later he struck the stoppage-time goal that brought Ahly their fifth Champions League title with a dramatic win over CSS in Tunisia and they went on to finish third in the FIFA Club World Cup.

Other highlights from the career of the humble star include scoring the goal that earned Egypt victory over Cameroon in the 2008 Cup of Nations final and being voted BBC Footballer of the Year the same year.

Aboutrika has strong political views, receiving a yellow card for removing his shirt after scoring against Sudan during the 2008 Cup of Nations and showing a tee-shirt with "sympathise with Gaza" written across the front.

His stand against a 10-day Israeli blockade won many admirers in Gaza with youngsters waving flags that said "Palestine loves Aboutrika", "Aboutrika is my idol" and "Aboutrika an example of freedom and dignity".

Aboutrika is a man of strong principles, who backs international campaigns against poverty and hunger, and he infuriated Tersana officials many years ago over his pay.

He and a defender were due to sign new contracts, but when the midfielder discovered his deal was worth a lot more, he turned it down and eventually forced the club to pay him the same salary as his less talented team-mate.

U/E: 'Stop wearing one attire at home, to market, chase wome...
7 minutes ago