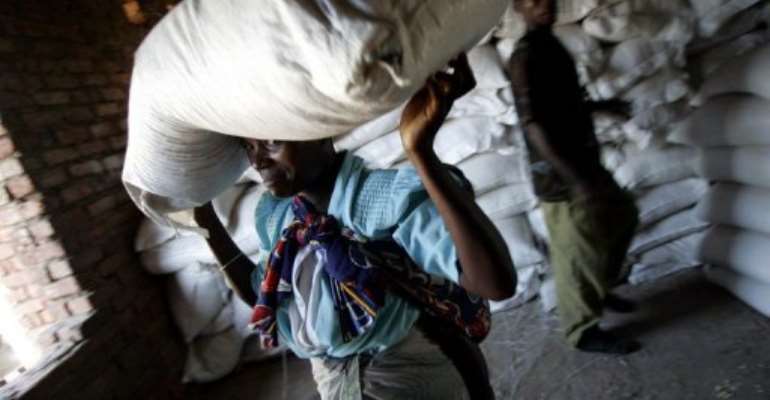 A Malawian woman from Tengani village carries a ration of maize distribuited by the World Food Program. By Gianluigi Guercia (AFP/File)

The AfDB grant is the latest sign to the nation's improving fortunes.

Finance Minister Ken Lipenga was quoted by the official Malawi News Agency at the signing of accords with AfDB officials in the administrative capital Lilongwe as saying the grant was "timely."

It will be be used in the 2012-13 budget and help to get the economy back to "a strong growth trajectory."

Andrew Mwamba, the bank's resident representative said the AfDB "felt it necessary to help with the grant after being encouraged by the renewed commitment shown by the government in restoring and sustaining a sound fiscal and monetary policy environment."

But since Mutharika's death in April, new President Joyce Banda has embarked on economic reforms, moved to repeal repressive laws and improve ties with donors.

The World Bank on Tuesday unveiled a $110-million package for roads, farms and health care, while Britain added $37 million to its earlier $47 million aid scheme to shore up the economy.

"We are confident that the resources provided will assist government to create fiscal space for additional social safety net spending towards the poor and the vulnerable groups," Mwamba said.