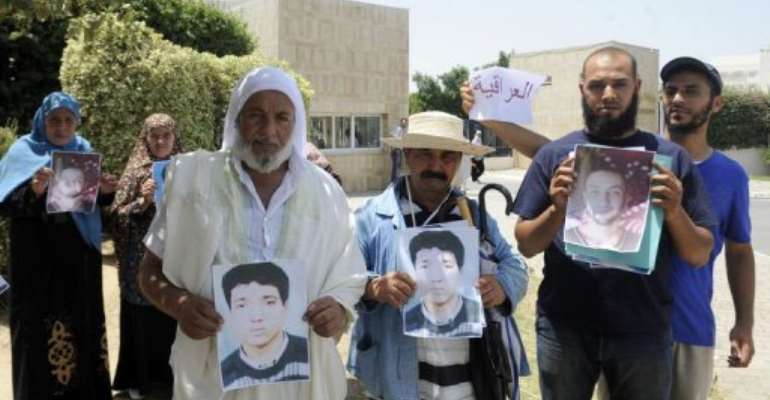 TUNIS, Tunisia (AFP) - Hardline Salafists on Wednesday joined a protest by parents of 22 Tunisians detained in Iraq to protest the government's failure to repatriate them, an AFP journalist reported.

"No one listens to us, these youths have come to help us," said Saliha Medini, thanking the bearded young Islamists who held a sit-in outside the foreign ministry in Tunis.

Medini's son Mohamed, 26, who is being held in Baghdad awaiting trial, travelled to Iraq in 2009 to join the insurgency, his mother said.

"My son has been seriously tortured, and is now ill. But like (under ousted dictator Zine El Abidine) Ben Ali, this government does not lift a single finger to return our children to us," she said.

The black and white flag of the Salafists hung over the tents housing the protesters outside the foreign ministry, in the baking heat.

In November last year, Iraq executed a Tunisian man after he was convicted of involvement in a 2006 attack on a revered Shiite shrine that unleashed a wave of sectarian bloodshed.

Yusri al-Tariki, 27, had been detained in Iraq since 2006, after travelling to the country in 2003 to participate in the insurgency against US forces, his father said, adding that his son was tortured and forced to implicate himself in the attack.

Tunisia's then president, Fouad Mebazaa, had appealed to his Iraqi counterpart Jalal Talabani to pardon Tariki a week before his execution.