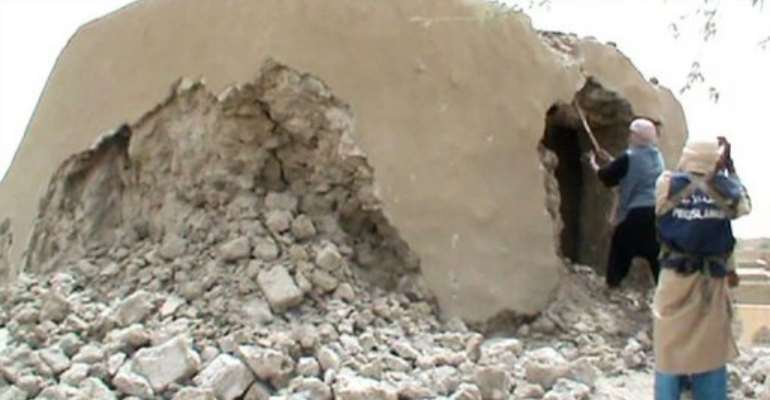 A still from a video shows Islamist militants destroying an ancient shrine in Timbuktu on July 1. By (AFP/File)

PARIS (AFP) - The mausolea of Timbuktu, known as the "city of 333 saints", are shrines in the Sufi brand of Islam dominant in Mali but a heresy to the fighters who follow the radical Wahhabi tradition, experts say.

Fighters from the Ansar Dine (Defenders of Faith) group which controls large swathes of northern Mali on Tuesday started hacking away at two tombs that are part of the ancient Djingareyber mud mosque, the city's largest.

Equipped with pickaxes and shovels, the fundamentalist group started wrecking other shrines in the fabled city, whose cultural treasures are listed as endangered World Heritage, on July 1.

Many moderate Muslims across the world visit the tombs of saints as "a sort of door to heaven" where someone in difficulty can ask for divine intervention, French anthropologist Jean-Claude Penrad explained.

But Wahhabists deem the shrines to be "haram", or forbidden in Islam, because they believe that there can only be one God in Islam and that worshipping other deities is idolatrous and an attack on Islam's purity.

In their eyes "other veneration is a sort of heresy, a way of stepping away from the oneness of God," Penrad explained.

The tradition started in the Middle Ages with a fatwa, or religious decree, from the theologian Ibn Taymiyya (1263-1328) that said tombs of saints should be destroyed.

Centuries later, followers of Mohamed ibn Abd al-Wahhab (1703-1791), the founder of the tradition, took on these principles which are nowadays particularly prevalent in Saudi Arabia and Gulf states.

Ansar Dine and other Al Qaeda-inspired groups follow the orthodox Wahhabi strain of Islam, in which the focus is on respecting and enforcing Islamic laws as a way of pleasing God.

In Mali, the Wahhabi tradition is the exception to the widespread Sufi brand of Islam which has dominated the region for years.

Sufis focus on developing an inner, personal relationship with God. Their more heterodox, mystical faith recognises divine manifestations in pre-Islamic traditions and is less exclusive of other cultures.

The motives of groups such as Ansar Dine are not religious but political, said Penrad, explaining that their aim is to "exercise maximum control over people" and instill "a global vision of Islam".

The Wahhabi tradition is not alone in history in opposing the worshipping of saints, it is something common to all religions, historian Odon Vallet said.

"We can draw parallels with the Calvinist Protestants in the 16th century who ransacked Catholic churches, looting and destroying statues and buildings," he said.

"It's always the same -- if you have saints and next to that God, the saints diminish the saintliness of God."