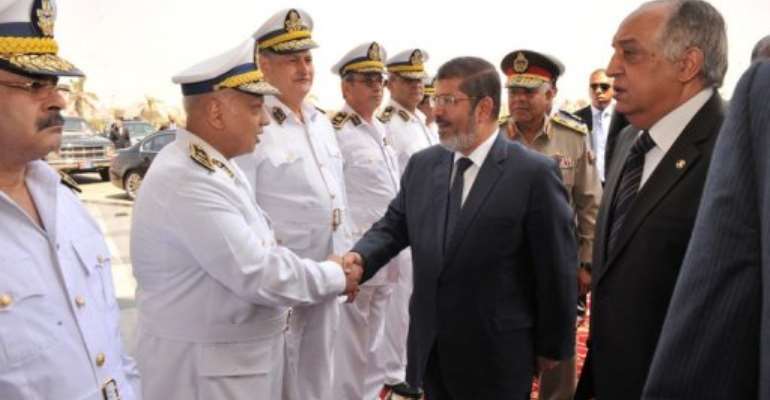 Morsi still has to contend with the Supreme Council of the Armed Forces. By (AFP/Egyptian Presidency)

CAIRO (AFP) - Egypt's president-elect Mohamed Morsi pushed ahead with selecting a government, as a court delivered a blow to the ruling military, suspending its powers to arrest civilians.

Egypt's first civilian president, and its first elected leader since an uprising ousted president Hosni Mubarak early last year, still has to contend with the Supreme Council of the Armed Forces.

The SCAF, which took control after Mubarak resigned in February 2011, will retain broad powers even after it formally transfers control to Morsi at the end of June.

Already Monday, the president-elect had met Field Marshal Hussein Tantawi, the head of SCAF and the man to whom Mubarak handed power.

The new president has to contend with the fact that the country's top court earlier this month declared the Islamist-dominated parliament to be null.

The military also reserves the right to appoint a new constituent assembly should the one elected by parliament be disbanded by a court decision expected on September 1.

But the Muslim Brotherhood has insisted that only parliament can appoint the assembly.

Morsi was the candidate of the Muslim Brotherhood, even though he resigned from the movement in order to take the top job, pledging to represent all Egyptians.

"All these details are on the table for discussion," said a senior aide to the president-elect on Tuesday. "Nothing has been settled yet, and no decision has been taken."

A court ruling on Tuesday however pushed back the reach of the military in a ruling welcomed by rights groups.

Egypt's administrative court suspended a justice ministry decision that had empowered the military to arrest civilians, responding to an appeal by 17 rights groups against the controversial June 13 decree.

The head of military justice Adel al-Mursi had said earlier this month that the decree was necessary after the state of emergency expired on May 31.

But the Egyptian Initiative for Personal Rights watchdog welcomed the court decision, saying the decree had allowed the military the right to arrest people for "resisting the rulers and insulting them."

"The groups that filed the appeal believed that many of the crimes mentioned in the decree are included in the right of Egyptians to peacefully express political views opposing the regime," it said in a statement.

The United States said that it was reviewing the court ruling.

"I think I will take some time to review what has happened," State Department spokeswoman Victoria Nuland told reporters in Washington.

"But if it is in support of human rights and dignity for the Egyptian people, then it would be a good move."

The June decree had infuriated activists and protesters, who for years had campaigned to end to the state of emergency, which granted police wide powers of arrest and during the Mubarak era was often used to curb dissent.

Hosni Mubarak used it last year to call in the army in a bid to quell the uprising that eventually toppled him as president last year.

As Morsi continued his preparatory work, a senior aide said the president-elect was conducting talks to appoint an "independent national figure" as his premier.

"Most of the cabinet will be technocrats," he added, requesting anonymity because the presidency had not yet settled on its official spokesman.

Beblawi told AFP that he was abroad and had not yet been contacted.

Morsi has pledged to restore security and improve the economy, which is in tatters since the anti-Mubarak uprising. Egypt relies heavy on the revenue from foreign tourism, which has been badly hit since the uprising.

But ratings agency Standard & Poor's said Tuesday it was placing its 'B' long-term foreign- and local-currency sovereign ratings on Egypt on CreditWatch with negative implications.

"The CreditWatch placement reflects our view of at least a 50 percent likelihood of a downgrade over the next three months," the agency said.

The International Monetary Fund said Tuesday it was ready to help Egypt with the economic challenges ahead.

"The IMF stands ready to support Egypt in dealing with these challenges and looks forward to working closely with the authorities."

An IMF package had been delayed before the election as the lender insisted on agreement among Egypt's political forces on the aid.