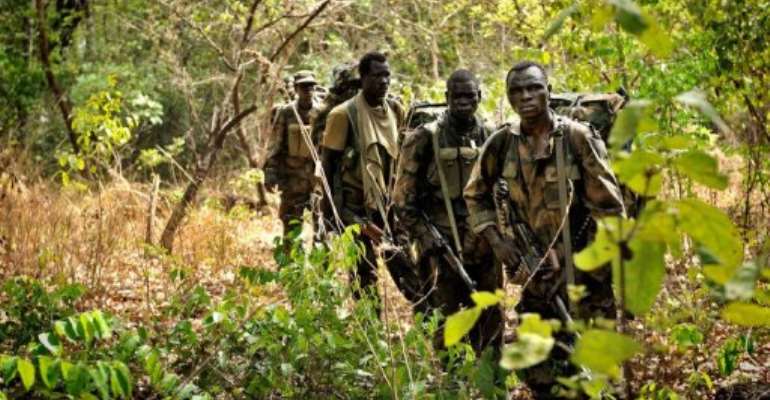 Ugandan soldiers patrol through the Central African jungle during an operation to fish out Joseph Kony. By Yannick Tylle (AFP/File)

Uganda, South Sudan, Central African Republic and Democratic Republic of Congo agreed earlier this year to set up a 5,000 strong force under the African Union to chase the notorious Kony.

But most of the force has still to be deployed in the huge, remote jungle and mountain region where the LRA fighters are said to be.

"These troops lack almost everything: they lack boots, they lack uniforms, they lack food rations and they sometimes lack training. So there is a need for these things to be supplied that make a difference on the ground," Francisco Madeira, AU special envoy on the LRA told reporters.

Abou Moussa, UN special representative for Central Africa, said that all four countries had committed to provide the troops. "The issue is the resources to maintain them."

Kony, who launched his rebellion in Uganda two decades ago, is now said to have between 300 and 500 troops and about half of these are children or former child soldiers.

"He is being tracked but it is still very difficult to say wherever he is," said Moussa. "There is a press report that he is in Darfur but we can't confirm that. What is certain is that LRA as a group continues to commit atrocities in those areas."

The AU and UN envoys praised the 100 US Special Forces who are training the army in Central African Republican and DR Congo and helping with some soldiers already launched in the hunt.

The UN and AU will set out an anti-LRA strategy to the UN Security Council on Wednesday.

As well as appealing for support for the military force, the envoys said greater help is needed to protect civilians in the LRA conflict zone, to tempt defectors and to help the governments establish authority in the areas.

They will be meeting representatives of European, US and African governments on Thursday to seek new help.

A new report released this week by the Resolve advocacy group argues that the US military advisors should be given greater scope to get out and lead the hunt for Kony as part of efforts to put new impetus into the campaign.

The report said the Ugandan military, "the most capable force pursuing the LRA, has been forced to withdraw from Congolese territory and has as few as 800 troops remaining in the field."

Resolve said that Kony was "reportedly hiding along the border between northern Central African Republic and South Darfur."

Efforts to trap Kony, who is wanted by the International Criminal Court, have been redoubled since the release of an Internet documentary this year which has been viewed more than 90 million times.

The UN says that despite the greater publicity, Kony is pursuing an ever more desperate rampage in Central Africa and has abducted more than 600 child soldiers over the past two years.