US mission in Libya's Benghazi attacked 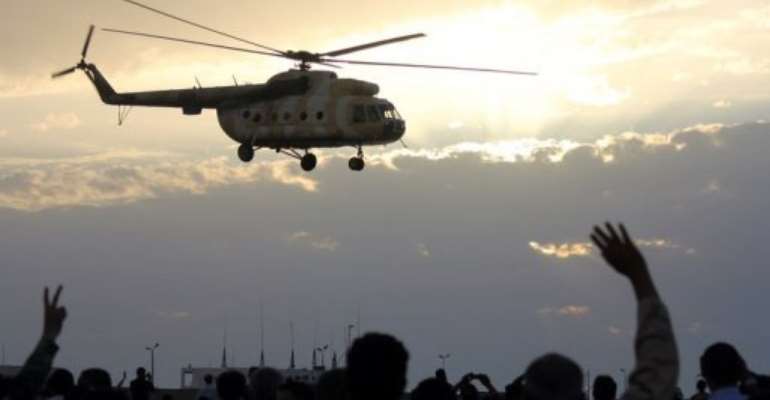 A helicopter flies over Benghazi during a military display. By Abdullah Doma (AFP/File)

TRIPOLI (AFP) - The US diplomatic mission in Libya's main eastern city of Benghazi came under attack and one person was wounded, officials said on Wednesday.

"There was an attack late last night on the United States office in Benghazi," a US embassy official said, adding only the gate was damaged and that no one was hurt.

However, Libyan authorities later reported that a guard was "lightly wounded."

The diplomat said a home-made bomb had been used in the attack on the office, set up after the 2011 uprising against Moamer Kadhafi and kept open to support the democratic transition.

"The US deplores the attack on its diplomatic mission in Benghazi," he said, adding that a request had been made to Libyan authorities to step up security around US facilities in the country.

The American official said there was no claim of responsibility.

The US State Department said there was no reason to suspect the attack was in retaliation for a US drone strike in Pakistan that killed Al-Qaeda's number two Abu Yahya al-Libi, a Libyan citizen.

"We deplore the attack on our diplomatic mission in Benghazi. Fortunately, no one was injured... And we have also requested the Libyan Ministry of Interior to increase its security around US facilities," spokesman Mark Toner said.

A security source in Benghazi said the attack was claimed by the Prisoner Omar Abdelrahman Group, which had left a letter "threatening American interests" in Libya.

The same group -- which is named after an Egyptian sentenced to life in prison in the United States -- claimed a May 22 attack on the offices of the International Committee of the Red Cross, the security official said.

Deputy Interior Minister Unis al-Sharef said an explosive device detonated about 500 metres (yards) from the US premises at around 3:00 am (0100 GMT), adding the building itself was not hit.

Sharef said the attack could have been linked to the announcement of Libi's death.

"Abu Yahya al-Libi has backers in this country and this (attack) could have been carried out by them," he told AFP.

The ministry official confirmed the attack had been claimed by the Prisoner Omar Abdelrahman Group, but downplayed the significance of the organisation.

"These are religious groups and these acts are just reactions. There are not coordinated operations," he stressed.

The spokesmen of the ruling National Transitional Council and the interim government said there had been no claim of responsibility for the attack.

Sheikh Omar Abdelrahman, 73, received a life sentence in the United States for his involvement in plots to hit New York targets and a plan to assassinate former Egyptian president Hosni Mubarak.

Abdelrahman, known as the "Blind Sheikh," is also cited as one of the inspirations for the first attack on the World Trade Center, which killed six people and injured more than 1,000 in 1993.

Mohammed al-Harizi, spokesman for the ruling National Transitional Council, condemned the bombing and said the authorities were investigating.

Senior interior ministry official Ibrahim al-Sharkassia later said the car of the attacker had been identified.