No sign of Arab Spring as Algerians trickle to polls 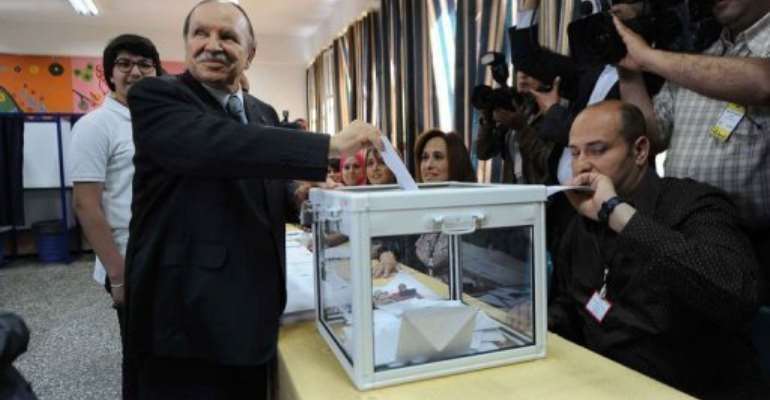 ALGIERS (AFP) - Algeria Thursday held its first polls since the Arab Spring amid deep voter disaffection, with the ruling party confident of victory and its Islamist allies hoping for a strong showing.

As it does for every vote, state television launched its live election day coverage with footage of voters pouring into a polling station as soon as the doors opened and jostling to be the first to cast their ballot.

The top three parties contending the elections are already in government together, leaving turnout as the only significant figure to watch.

Many polling stations in Algiers seemed largely deserted and the overwhelming majority of voters were elderly but the state reported the highest turnout in the vast country's most inaccessible desert regions.

President Abdelaziz Bouteflika, who was a minister in Algeria's first independent government in 1962, has said the polls should mark the rise of a new generation.

In Bab El Oued, the beating heart of Algiers, the narrow tree-lined streets winding down to the seafront were unusually silent and the youth's mood was one of bitter resignation.

"I switch on the TV set and I see election coverage on the state channel. It's like news from a foreign country," said Mohamed, a 30-year-old employed by a water delivery company.

"It's not Algeria, it's the land of those people in power."

In messages exchanged on Facebook in the run-up to the vote, some young Algerians were wishing one another a "happy no-vote day" and enjoying a day off or making plans for an extended weekend at the beach.

One party, the Rally for Culture and Democracy, has urged a boycott and believes the real turnout is unlikely to top 20 percent, a forecast echoed by many Algerians in the street.

Speaking on state television with a poster of Bouteflika behind him, the interior minister gave a provisional turnout figure of 27.04 percent at 1430 GMT, with three and half hours of polling to go.

The secretary general of Bouteflika's National Liberation Front, Abdelaziz Belkhadem, said last week that 45 percent would be a satisfactory rate.

The regime has tried to assuage fears of fraud by inviting some 500 foreign election observers but Algeria is four times the size of France and few voters seemed convinced.

Foreign observers, who were denied access to the national voters roll, reported no serious irregularities.

Algeria has witnessed more self-immolations than Tunisia since 2011 and many people cannot understand how a state with foreign exchange reserves of $182 billion does not do more to improve their lives.

Social discontent and deadly riots rattled Algeria in January 2011 when popular revolts were spreading across the region but the regime snuffed out the protests with a sprinkling of political reforms and pay rises.

Forty-four parties -- 21 of them newly created -- are battling for seats in an enlarged 462-strong parliament, in what Bouteflika has hailed as "the dawn of a new era".

His former single party has been steadily losing ground since pluralism was introduced in 1989 and has 136 seats in the outgoing assembly.

Belkhadem said the FLN would remain the top party but it is expected to seek alliances to govern.

The FLN is currently in a coalition with the National Rally for Democracy of Prime Minister Ahmed Ouyahia and the Movement of Society for Peace (MSP), the main legal Islamist party.

The MSP hopes it can cash in on the so-called "Green wave" that swept Islamists to the helm in Tunisia, Morocco and Egypt in the wake of the Arab Spring.

But the MSP lacks credibility with the radical Islamist base and is often described as a token party created by the regime to occupy the religious ground.

Many Algerians believe the country had its own, failed Arab Spring when the one-party system ended and the now banned Islamic Salvation Front (FIS) won the first round of the ensuing 1991 election, considered the last free polls.

The army interrupted the vote, sparking a brutal decade-long civil war that left around 200,000 people dead.

Bouteflika is 75 and the issue of his succession looms large.

"These legislative polls feel a bit like primaries for the 2014 presidential vote," sociologist Nacer Djabi said.