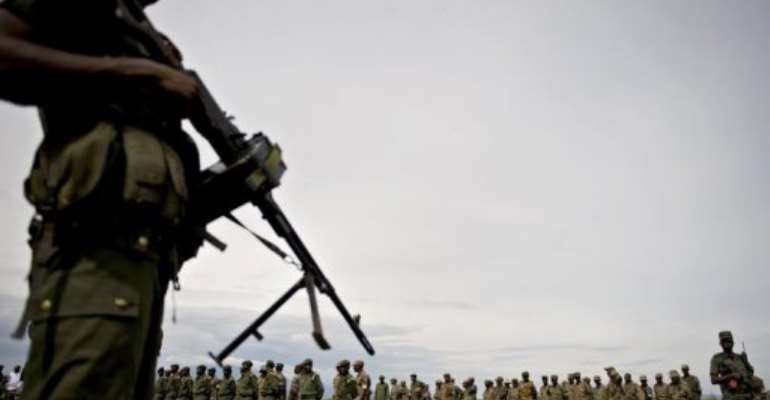 A Congolese soldier guards ceremony held by the Congolese army to bring CNDP fighters into its ranks, in 2009. By Walter Astrada (AFP/File)

KINSHASA (AFP) - A group of army deserters in eastern DR Congo said Monday their mutiny was brought on by poor living conditions, and called for a revival of the peace deal that merged former rebels into the military.

The ex-members of rebel group the National Congress for the Defence of the People (CNDP) announced they had launched a new group, the March 23 Movement, to "revitalise" the peace deal that integrated eastern rebel forces into the Democratic Republic of Congo's national army in 2009.

"We are mistreated. Army soldiers have to sponge off the people, the money invested for military operations is embezzled by the generals in Kinshasa," Lieutenant Colonel Vianney Kazarana told AFP.

"Despite our complaints, we haven't received any response from the government in Kinshasa. That's why we soldiers have decided to abandon the integration programme."

Hundreds of former CNDP members mutinied last month, complaining of inhumane treatment in the regular army. Fierce clashes have broken out between deserters and loyalists, forcing hundreds of people to flee their homes.

The Congolese army at the weekend issued an ultimatum to the mutinous troops to fall back into rank, and vowed Monday to go after any who do not comply.

Kazarana said all officers in the mutiny had been ordered to respond only to orders from Colonel Sultani Makenga, who deserted Thursday night and is reputed to be in the Rutshuru region on the border with Rwanda and Uganda.

Makenga was the number-two officer in eastern anti-rebel operation Amani Leo ("peace today" in Swahili), which President Joseph Kabila suspended after the mutiny.

He was also an adviser to former CNDP chief of staff General Jean Bosco Ntaganda, whom the government has accused of masterminding the mutiny -- a charge he denies.

Kazarana also denied the group was allied to Ntaganda, who is wanted by the International Criminal Court (ICC) for using child soldiers.

"We're not with General Bosco Ntaganda. The government in Kinshasa reports that he is protected by the head of state himself," he said.