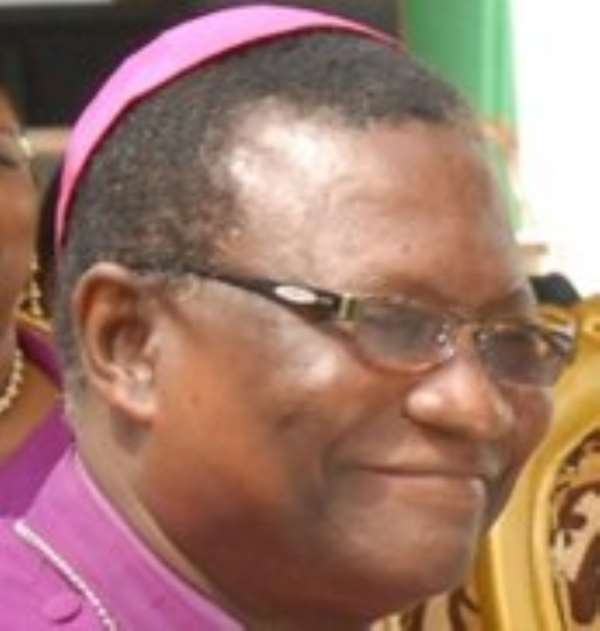 Most Rev. Prof. Emmanuel Asante, Chairman of the NPC The National Peace Council (NPC) has urged the security agencies to investigate all violations and violence committed by supporters of political parties and bring the culprits to justice without delay.

It also called on the law enforcement agencies to exhibit professionalism and neutrality in the discharge of their duties.

“There seems to be a breakdown of law and order with some pretending to be above the law and others taking the law into their own hands. The National Peace Council would like to emphasise that electoral processes do not have to be characterised by violence in any form,” the NPC said in a press statement issued at Dodowa in the Dangme West District Thursday.

The statement was issued ahead of a meeting between the NPC and political party representatives to discuss the promotion of peace before, during and after the December general election.

Signed by the Most Rev. Prof. Emmanuel Asante, Chairman of the NPC, the statement condemned the violence that had characterised the ongoing biometric voter registration at some of the registration centres across the country, as well as the brutalities meted out to some citizens in connection with the exercise.

It expressed regret that in some instances, notable political leaders had engaged their political opponents in verbal insults, inciting violence through hate speeches and statements, while rampaging youth of some political parties carrying offensive weapons moved about threatening to visit mayhem on perceived political opponents.

“Electoral violence is not an inherent part or feature of any democracy in the world. Clearly, political differences cannot be resolved through molestations and abuses,” the statement pointed out.

“It is worrying that, as a nation, we seem to have traded our sense of objectivity for partisan subjectivity when it comes to the issues of justice, law and order and the enforcement of same.

The statement urged the leadership of political parties to play a crucial role by calling their supporters to order, stressing that it was the responsibility of the police to resolve tension through peaceful means.

“The most disadvantageous peace is better than the most just war. Violence has never produced peace. Violence may force a semblance of peace, but violence will always be violence,” the statement remarked.

It urged all Ghanaians to ensure that justice and peace prevailed before, during and after the elections.

The statement particularly appealed to the media to ensure that their reportage and political discussions enhanced the understanding of the values of political diversity, conflict sensitivity, trust, tolerance, confidence building, negotiation, mediation, dialogue and reconciliation.

During the meeting, representatives of political parties expressed concern about recent violence that had characterised the political landscape and pledged their commitment to promote peace.

They underlined the paramountcy of peace to the development of the country and urged all political actors, including the security agencies, to act in the interest of peace.

Conspicuously missing at the meeting was the ruling National Democratic Congress (NDC).

According to the Executive Secretary of the NPC, Mr Francis Azumah, the council had officially invited the NDC to the meeting, but he did not know why the party failed to make an appearance.

A representative of the NPP, Mr Kwadwo Opare Hammond, said his party believed in peace and the rule of law for which even in the face of several provocations, it had continuously restrained its members from any violent act and to remain calm.

The General Secretary of the PNC, Mr Bernard Mornah, said his party would continue to discuss issues without engaging in insults, and asked other political parties to do same.

Rhodaline Imoro Ayana of the CPP said there was the need for Ghanaians to learn from volatile events in neighbouring countries, adding,

“This is not the time to beat war drums but to sit together and seek solutions to our numerous problems”.

The National Chairman of the PPP, Nii Allotey Brew-Hammond, said the recent acts of political violence were driving away potential foreign investors, and urged all the political parties to check the behaviour of their members.

The participants outlined some of the challenges associated with the biometric voter registration, how to improve on those challenges, and how to inject sanity into the electoral process to enhance peace before, during and after the December elections.