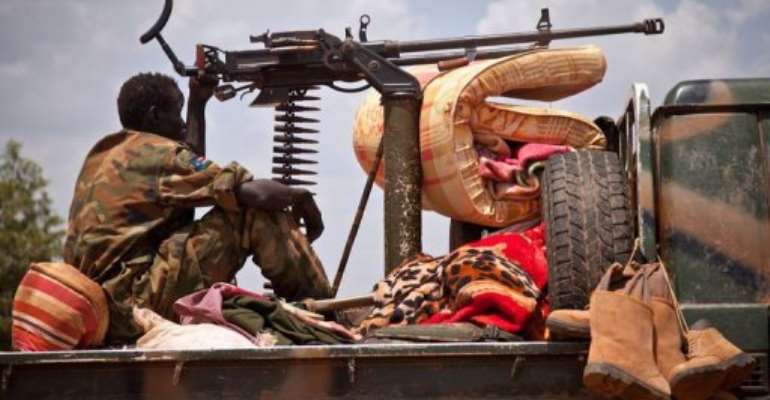 A SPLA soldier sits next toe a machine gun on a vehicle outside an old Sudan Armed Forces compound in Heglig. By Adriane Ohanesian (AFP)

KHARTOUM (AFP) - South Sudanese forces have made a diversionary attack near the contested Abyei region, state-linked media in Khartoum said, as the South vowed to hold its position in a seized oilfield further east.

The attack struck Sudanese troops in the Bahr El Arab river area, 62 kilometres (38 miles) south of El Meiram, on Tuesday, said the Sudanese Media Centre (SMC) which is close to the security apparatus.

That area is just outside Abyei and along the South Darfur border with South Sudan's Northern Bahr El Gazal state.

But the South's Sudan People's Liberation Army (SPLA) reported 15 Sudanese troops killed along with seven of its own.

Such figures are impossible to verify.

"SPLA is not advancing towards those areas," deputy spokesman Malaak Ayuen said.

He said his forces clashed with Sudan's on Tuesday morning in Kiir Adem, a Northern Bahr El Gazal/South Darfur border village on the south bank of the river.

The area is Southern-controlled but disputed, and was bombed by the north last year.

It is the first reported clash in the area since Southern troops on April 10 seized Sudan's most important oilfield of Heglig about 170 kilometres (105 miles) to the east.

The United Nations, the United States and the European Union have criticised the South's occupation of Heglig, equally denouncing Sudanese air strikes against the South.

There are widespread fears the fighting will spread.

It is already the worst since South Sudan won independence last July after a 1983-2005 civil war.

South Sudan President Salva Kiir has set conditions for a withdrawal from Heglig. Among these is that Sudanese forces occupying Abyei must withdraw.

He has threatened to send troops into Abyei if the United Nations does not pressure Khartoum to leave the area.

Abyei was to hold a referendum in January last year to determine whether it would be controlled by Khartoum or Juba but the vote was stalled and Sudanese troops seized the area in May.

The UN, which has a peacekeeping mission in Abyei, says Sudanese forces remain above the river, while South Sudanese police are stationed south of it.

On Tuesday, the African Union (AU) renewed its demand for both sides' forces to leave the region.

UN Secretary General Ban Ki-moon this week expressed alarm over reports of a build-up of armed militia in the Abyei area.

"The secretary general calls on the government of Sudan to ensure the full and immediate withdrawal of these elements", Ban's spokesperson said in a statement.

Sudan and South Sudan agreed last year to jointly form a mission to monitor the Abyei border area and asked that it be supported by the UN, but the deal has not been implemented.