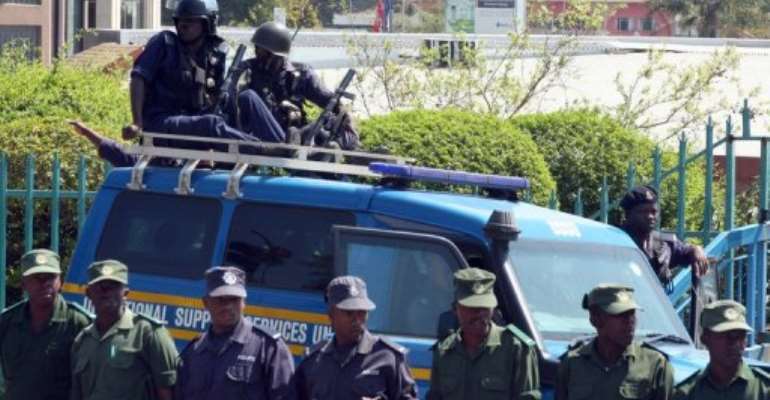 Swazi riot police are pictured in Mbabane in 2011. By Jinty Jackson (AFP/File)

JOHANNESBURG (AFP) - Swazi riot police detained at least seven activists Saturday on their way to a pro-democracy church service in the central city of Manzini, one of the activists said.

Wandile Dludlu from the Swaziland United Democratic Front (SUDF) and head of the banned Pudemo opposition Mario Masuku were among those held, Dludlu told AFP.

"Seven people were detained," he said. "We had scheduled a national prayer for democracy."

Police had set up road blocks to stop people from attending the service.

"Just as I approached the premises a crowd of police in riot gear was surrounding the church. There must have been around 60," said Dludlu.

"They told me it is an order that today (Saturday) there isn't going to be allowed any prayer here."

Dludlu was forced into a police van, taken to the regional police headquarters and later to the capital Mbabane, he said.

On his release Dludlu learned that Masuku and five others had been detained as well. SUDF spokeswoman Gugu Malindzisa and another woman activist have since been freed.

"They're being interrogated and released one by one," he said.

The government on Thursday arrested trade union leaders who defied a court order blocking demonstrations to mark a ban on political parties and the suspension of the constitution that have allowed the king to rule by decree since 1973.

"The general spirit was to carry on with protests somewhere in mid-May," Tucoswa spokesman Vincent Dlamini told AFP.

Pro-democracy groups have further slated Mswati's 44th birthday celebrations on April 19, which the kingdom's impoverished subjects have been ordered to make contributions such as cows.

"With Swazis being so ruthlessly taxed, the one man who does not pay taxes in the country, and yet happens to be the richest, is adamant that he should take the little the country has and use it on a birthday party for himself, his wives and his children," said the April 12 Swazi Uprising Movement in a statement.

"This is pure evil. Why does he not go to Kuwait and ask his friends there to throw him a birthday party funded with petro-dollars?," said the movement, whose name is inspired by the date political parties were banned 39 years ago.

But the Swazi government this year has nonetheless pledged to make a contribution toward the five million rands ($652,000, 490,000 euros) budgeted for the celebrations.

Mswati is rated by Forbes magazine as among the world's 15 richest monarchs, with a personal fortune of more than $100 million. He has 13 wives, each with their own palace.

But 60 percent of his subjects live on less than two dollars a day in one of the world's poorest countries, which is bordered on three sides by the continent's economic powerhouse South Africa.