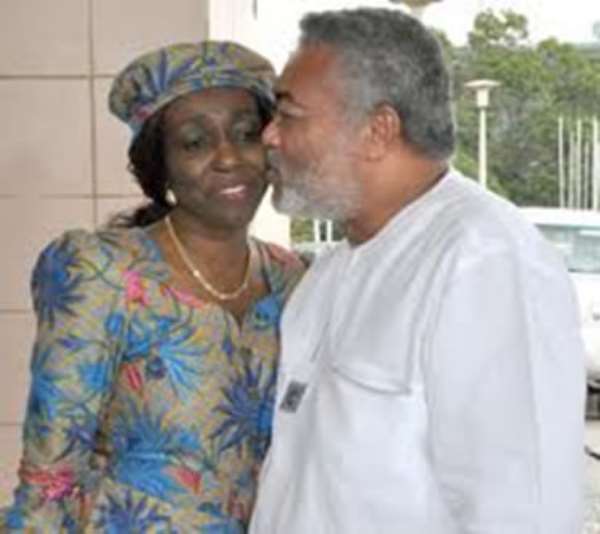 “Nobody but they themselves should be able to end their agony”

An Assistant Professor of English at the Brooklyn Campus of the Long Island University, New York, Dr. Michael J.K. Bokor says it is very sad that former President Jerry Rawlings, in spite of all the successes he has achieved is becoming his own enemy since leaving office.

According to Dr. Michael Bokor, the National Democratic Congress (NDC) founder “can't understand that nation-building is a collective effort and wants to do it all by himself, strictly according to his own standards”.

He said, it is a pity to observe the image of ex-President Jerry Rawlings and wife, Nana Konadu sink very fast in the estimation of the public. Adding that, nobody but they themselves should be able to end their agony.

Dr. Michael Bokor's comments are contained in a write-up he has posted on the internet last weekend.

Below is the full text of Dr. Michael J.K. Bokor's article titled:

“How does Rawlings expect Ghanaians to remember him”?

It is pathetic that despite all the good work that Rawlings has done for the country, he is the very person staining his own image many years after leaving office. By constantly erring on the part of the wrong cause, he has fast become a bugbear. He has been told this plain truth for many years now, but he hasn't changed for the better.

It seems he is happy only when his name is on everybody's lips as a constant reminder of patriotism gone amiss. He can't understand that nation-building is a collective effort and wants to do it all by himself, strictly according to his own standards. As he seeks to carry the whole world on his shoulders, Ghanaians have given him a pad and are standing by to watch him. He is indeed agonizing, provoking concern that he may do what will destabilize the government and negatively affect our democracy.

I want to use this opportunity to reiterate that concern, hoping that something better will come from him to rehabilitate his public image. It is a pity the way he and his wife are sinking very fast in the estimation of the public. Nobody but they themselves can end their agony. Here is why:

A man searching for a coin in his pocket does so because he lacks a coin in hand, and he stops searching when he gets hold of one—or, of course, when he comes to the conclusion that the whole project is bootless, because it happens that there is no coin in his pocket, or that it is uneconomical, because the effort involved is such that the search costs more than it comes to (Galanter and Gerstenhaber: “On Thought: The Extrinsic Theory,” Psychology Review 63 (1956): 218–227).

Rawlings searched for political power and had it for 19 years. After leaving office, he still craves for it and is embittered because neither he nor his wife can get it to do whatever they may have in mind. What do they have in mind that they couldn't use that power to do in all the 19 years that they ruled but will now want to do so?

They are either pathologically infirm or need some divine intervention to survive in this era.

Anybody telling them anything to the contrary isn't helping them at all. Such a person is doing them a world of disservice. And there are many of those people whose demonstration of loyalty to them seems to be just an empty lip-service.

Either way, there seems to be a symbiotic benefit in that relationship. While the Rawlingses use such disgruntled and mischievous characters to prosecute their personal agenda of creating tension and benefitting therefrom, those characters also lean on the Rawlingses to blackmail the government in the hope that their demands for petty favours will be heeded. It is an unholy alliance.

There is no doubt that even though some Ghanaians are quick to vilify the Rawlingses, many appreciate their good aspects. Word has it that even their bitter opponents secretly admire them in one way or the other for what they did in office to uplift standards through the provision of development projects and the raising of political awareness, especially.

If any of them openly declares disdain for the Rawlingses, he is doing so because of the mistaken impression that taking on the Rawlingses will make them popular. It is an empty “show-show.” In the quiet of their closets, they regard his worth but can't openly admit it for whatever reason(s).

Rawlings especially needs to listen to reason. Otherwise, when he runs himself aground, he will look for redemption but not get it. In truth, he has already become the butt of public ridicule. Signs are gradually emerging that he is heading toward that nadir. That is why we will continue to draw his attention to all these self-created problems to alert him to the danger ahead of him.

Statesmen don't do things the way he has chosen to act. They know when to quit active politics to allow others the chance to serve their countries. And by graciously bowing out, they earn more respect.

It is just like a civil servant retiring from active service and putting everything behind him to live his last days unencumbered by the worries, cares, and fears of public service. They can't ever return to pick the pieces. Take the Head of the Civil Service, for instance. When he retires, does he want to be given any space in the Civil Service to peep into affairs and bother his successors? That stage is the ultimate point-of-no-return.

Leading a country has its own implications but the entailments of that ultimate point-of-no-return retirement are universal. Rawlings has left the highest office of the land but can't bring himself to recognize the fact that the doors are shut to him forever. That he still wants to have his way is a clear demonstration of that posture.

As he insists on calling the shots, he continues to hit the brick-wall; yet, he persists and creates needless anxieties in reaction instead of accepting it in good faith as a fait accompli. He even loses sleep for that matter. Will he ever learn any lesson from others elsewhere who behave otherwise and earn respect?

Some of such former leaders have already made their long-lasting impressions and their names will be etched in solid rock to be remembered forever. They are shining examples to emulate.

One such living icon is South Africa's Nelson Mandela whose exemplary attitude to politics is unmatchable.

Despite being subjugated to a life of misery, spending 27 years of his productive youthful life in solitary confinement, he survived to become a beacon in politics. Rawlings was one of those leaders who dashed down to South Africa to celebrate his release in 1991 and inauguration into office in 1994 as the first black African President of post-Apartheid South Africa.

Mandela set an example in leadership when he ruled for just one term and repaired to the background to give others the chance to use their God-given endowments to shape the country's future. Whether his successor, Thabo Mbeki, failed to move the country forward is not my business. His removal from office is part of the dialectics of South African politics; but neither he nor Mandela is creating any trouble for anybody in government, especially Jacob Zumah.

It is not for me to judge Zumah either. The peculiarities of the ANC's approach to governance may have to be specifically analyzed within the context of the vicissitudes of the protracted armed struggle that characterized its operations, and which has definitely played a huge part in how the leaders govern that country.

The good part is that despite all the harm that the Afrikaans segment of the South African population did to the indigenous African citizens and all others regarded as racially inferior under the Apartheid regime of the Nationalist Party, no one is leading any crusade of vengeance.

Nelson Mandela has been the voice of reason, peace, and reconciliation, acting sternly to heal wounds and sustain national unity. That is a huge paradox. It is only a person with an extra-ordinary make-up who can act the way Mandela does.

He has a big heart and a clean conscience that teaches lessons to all of us. For as long as we remain human and mortal, vengeance shouldn't be ours. I bet you that Mandela is at peace with himself and with all others; hence, the huge goodwill that he enjoys all over the world. The slightest mishap that threatens his health is the concern of everybody in this world. The world rarely gets people of his kind.

I am using Mandela to make my point. There is none alive today who has endured as much pain just for fighting a good cause for his country as he has done. Yet, he harbours no ill-feeling against his tormentors nor does he expect political power to be bent to satisfy parochial personal or group interests. That is the mark of an icon.

One would expect that all those claiming to be close to him would learn the useful lessons that his life teaches. Rawlings is one of those who can boast of “knowing” this legendary statesman. The question is: What has he been able to learn from that attachment to influence his political life or even personal life positively for us to see the marked difference between him and those who wouldn't have learnt any lesson from Mandela?

Ever since acquainting himself with the living icon, Rawlings has glorified Mandela's accomplishments and is part of those who will be proud to be close to him. Has he learnt any lesson to influence his political life? I daresay no. Otherwise, why won't he do what will bring him honour even as he continues to add more grey hair to his lot and gradually gravitates toward the zone of senility?

Rawlings will soon be 65 years old—and old age comes with many physical and mental problems. He can't cheat Nature, if he cares to know.

For as long as he continues to render himself a pest in our current political dispensation, he shouldn't think that Ghanaians will uphold him as their beacon. By his own miscalculation, he risks losing all that goodwill.

As he continues to bend to his wife's dictates in pursuit of her Presidential ambitions despite the array of forces rejecting that bid, he comes across as nothing but a helpless scarecrow. And as he teams up with her and other like-minded characters to raise the political dust-storm that will blind them all, he will be working hard to erode his own accomplishments. Then, if anything happens to him, he will be regarded as a good riddance and remembered as such. Is that the image he is working hard to leave behind?

Inside Politics: Political Quotes
Catch up with all the political quotes from our politicians.
Sponsored
More Critics
Modern Ghana Links
Are Peace Fm And Joy News Responsible Media Houses?
SRCs Of Technical Universities Are In A State Of Coma
Don’t Appoint IGPs Who Are More Than 60 Years - Superintendent Tuubo
Request For The Suspension Of Your Secretary: Admission Of Poor Performance
A Brief Analysis of 'Sex for Grade' Exposé by BBC vis a vis, Undercover Work
Jinapor Responds to Gabby Otchere Darko’s GEG allegations on the PDS scandal.
Return Of Red Rooster : Nana Addo Stop Your Lies!!
Hon Isaac Adongo Writes
You're Welcome To Oti Region -Your Excellency The Former President Of Ghana
Election Reports Quotes Dossiers
TOP STORIES