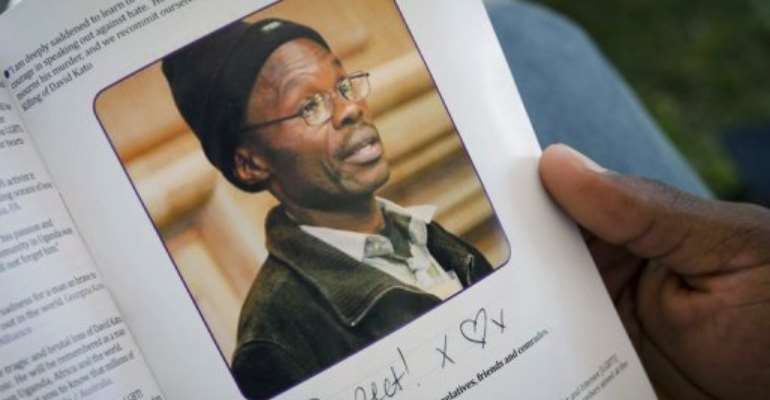 Kato was found bludgeoned to death at home outside Kampala on January 26 last year. By Michele Sibiloni (AFP/File)

NAIROBI (AFP) - Until a new anti-homosexuality bill caused a wave of homophobia in Uganda, John and Paul could hold hands in the streets of the capital Kampala and kiss in night clubs.

Then the nightmare started -- people began insulting and then assaulting them, and then they had to run away to Kenya. The couple have been in Nairobi since May of last year.

Like other lesbian, gay, bisexual and transgender (LGBT) people, they came to this urban jungle seeking anonymity, explained the official running a programme that looks after these refugees.

His organisation, which last year alone looked after 67 LGBT cases in Kenya, did not want to be named for fear of endangering its refugees.

Some have fled a strict application of Islamic law in Somalia, others are running from general sexual violence in the Democratic Republic of Congo and yet others have fled a climate of growing hostility elsewhere in east Africa.

Some hope to be able to find refuge in Western countries sympathetic to their plight, such as the United States.

In December, President Barack Obama said that fighting discrimination against gays should be at the forefront of American diplomacy.

"One form of discrimination ignored or even sanctioned by many states for too long has been discrimination based on sexual orientation or gender identity," he said at the meeting in Addis Ababa.

In Kampala, people "did not know we [gays] existed" until a member of parliament in 2009 proposed strengthening the law against homosexuality, which could already lead to a life sentence in prison.

"People demonstrated against us, told us we were not human beings. We could not buy from shopkeepers," recounted John, 26.

But worse was to come.

A screaming tabloid headline encouraged its readers to "hang" homosexuals and in October 2010 published the names, photos and addresses of more than 20 gays, including those of the couple.

Then Paul was attacked.

"I was watching a film when I heard a lot of noise," said the well-built 24-year-old. "People had broken into my place, armed with stones, sticks and machetes."

John, who was on his way to his boyfriend's home, fled when he saw the attackers.

"To me he was dead," he remembers thinking of his partner.

Paul owes his life to the intervention of the police, who however immediately jailed him. "I was physically abused, beaten, bleeding from everywhere," he recounted with difficulty.

His friend David Kato, a gay activist, intervened to get him freed.

Paul, whose home had been trashed and who no longer dared set foot in his three electronics shops, kept on hoping the situation would improve.

That is until Kato was brutally murdered just over a year ago, found bludgeoned to death at home outside Kampala on January 26, 2011.

The killing sparked widespread international condemnation, including from Obama who decried such crimes as "unconscionable" and said: "LGBT rights are not special rights; they are human rights."

After Kato's murder, Paul decided to join John who had gone into hiding in Busia, near the Kenyan border.

Their fellow Ugandan Danie, 31, avoided getting beaten up before her arrest because she never revealed she was transgender.

She was a civil servant in a prominent Ugandan institution. She also served, clandestinely, as point of contact for American and Canadian LGBT rights groups.

When her secret sideline was found out she was jailed for five weeks.

"They questioned me. 'What are your very ultimate objectives?' (they asked). I was accused of being an enemy to the government," she told AFP.

She was freed when a powerful uncle intervened and she fled to Kenya at the end of July 2011.

When she talks to people back in Kampala they tell her that Ugandan intelligence operatives have been trying to track her down in Nairobi.

LGBT refugees are in a particularly difficult position, said the official from the programme that helps them.

They cannot return home where their lives are in danger. Nor can they settle in Kenya, where refugees are not allowed to work and where homosexuality is also illegal.

The only solution is often to head to a third country.

His NGO has over the past several years tried to make humanitarian organisations aware of the extent of the problem.

"It's a very slow process, people are very reluctant to take care of LBGT refugees as such. They feel other priorities are more important."