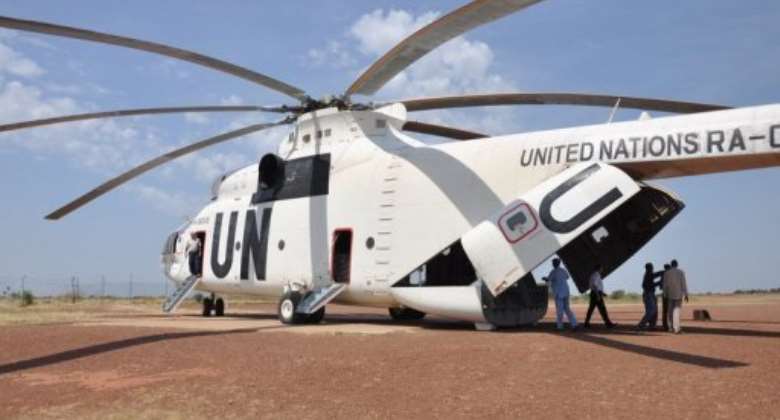 A UN plane ready to fly food to refugees in Yida, South Sudan in 2011. By Hannah Mcneish (AFP/File)

KHARTOUM, SUDAN (AFP) - Sudan on Friday rejected any plan for an aid "corridor" to war-torn southern states after the United States warned of a possible "horrific" famine affecting civilians in the area.

Susan Rice, the US ambassador to the United Nations, said on Tuesday the Security Council "would have to review a variety of other options" to get food to people in South Kordofan and Blue Nile states if famine breaks out.

She did not elaborate.

"The Sudan government refuses completely any plan for secure corridors to send the aid to South Kordofan and Blue Nile" unless Sudanese organisations and the national Humanitarian Affairs Commission are involved, the official SUNA news agency reported.

This is to ensure that aid does not reach rebel fighters, it said.

Food shortages would become critical without substantial aid deliveries by March, Rice said, accusing the Khartoum government of instituting "a deliberate policy" of blocking aid agencies from reaching civilians in the conflict zones.

"We have doubts" about Rice's comments on the humanitarian situation, SUNA quoted Suliman Abdulrahman, the country's humanitarian chief, as saying.

"We want Susan Rice to tell us the source of the information," he said.

The government has cited security concerns in severely restricting foreign aid organisations within the two states, where fighting erupted several months ago.

Abdulrahman said the government does not want a repeat of Operation Lifeline Sudan, which began in 1989 and allowed international agencies to provide relief to victims of Sudan's civil war.

He said that aid effort prolonged the fighting.

Princeton Lyman, the US special envoy to Sudan, on Wednesday called on South Africa to pressure Khartoum to let international aid groups into Blue Nile and South Kordofan.

"There is time to prevent a horrific tragedy," Lyman said.

Sudan's UN ambassador accused international aid workers of using UN flights to carry arms and ammunition for the rebels -- a claim for which the UN's top humanitarian official said there was "no evidence."

Valerie Amos said the UN is negotiating with the African Union and Arab League about providing observers in South Kordofan and Blue Nile, "to perhaps give the government of Sudan the confidence that they are looking for."

The UN backed statements by the United States that there could be a famine in the two states unless urgent aid is allowed in, and estimates that more than 500,000 people have been displaced or severely affected by the fighting.

The government is battling ethnic rebels once allied to insurgents who now rule in South Sudan which became independent from Khartoum last July after decades of civil war.