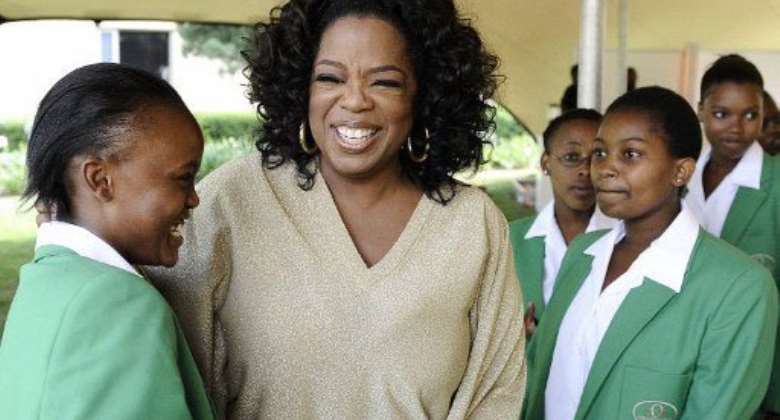 Oprah Winfrey with students of the first graduating class at her South African girls' academy in Henley on Klip. By STEPHANE DE SAKUTIN (AFP)

HENLEY-ON-KLIP (AFP) - A visibly excited Oprah Winfrey on Saturday personally congratulated the first graduates of her South African school, founded five years ago to turn a handful of impoverished girls into elite leaders.

Beaming as she exchanged hugs, jokes and celebratory cheers with green-uniformed girls ahead of Saturday's graduation ceremony on the immaculate campus of the Oprah Winfrey Leadership Academy for Girls, Winfrey defended the idea of investing lavishly in a small group of promising young women.

Founded in 2007 with $40 million from the US talk show queen and media mogul, the school has faced criticism for focusing on a select few -- there are 72 girls in the first graduating class -- in a country that struggles to meet basic education needs.

"We're investing in building leaders for this country," Winfrey told AFP in an interview Friday.

"The only way this country and developing countries throughout the world are going to have long-term sustainability, and not just sustainability but success, is through its women. Africa will be saved by its women."

Winfrey, whose rise to stardom and an estimated fortune of $2.7 billion followed an impoverished childhood scarred by sexual abuse and a teen pregnancy, said her career had taught her that change requires picking one's battles.

"If you start looking at the big picture and all the things that need to be done, you will never do anything," she said.

"You have to focus on what you can do, what you know how to do, and do that as well as anybody who's ever lived.

"I have to focus on what goes on within these kids and these walls.

And I do the best I can with that, and then those girls go out into the world. And that's what I try to tell them: do what you can, and that will be enough."

She said she is also breaking the cycle of poverty for the girls, who are mostly black and come from poor families.

"Each one of those girls walking across the stage represents a life born of freedom, the end of apartheid, that is able to now break the cycle of poverty in her family," she said.

"No girl in this class will ever be poor again."

Situated on an idyllic campus in the village of Henley-on-Klip, about an hour south of Johannesburg, the residential school has a 28-building campus including computer and science laboratories, a 600-seat theatre and a 10,000-volume library.

All 72 of Saturday's graduates passed their end-of-year exams and will attend universities around the world.

The campus was packed with celebrating families, VIP guests and journalists ahead of Saturday's 12:00 pm (1000 GMT) ceremony.

But the school has gone through its share of crises to reach this day.

Soon after it opened in 2007, the academy was hit by allegations that a dormitory matron had sexually abused some of the girls. She was arrested and charged, but later acquitted in a decision Winfrey described as disappointing.

Last year, the school was rocked by reports that a dead baby had been found in a student's bag after she apparently hid a pregnancy and gave birth in secret.

Winfrey said her own experiences had helped her deal with the crises at her school.

One Million U.S.-Donated Vaccines Arrive in Ghana
37 minutes ago