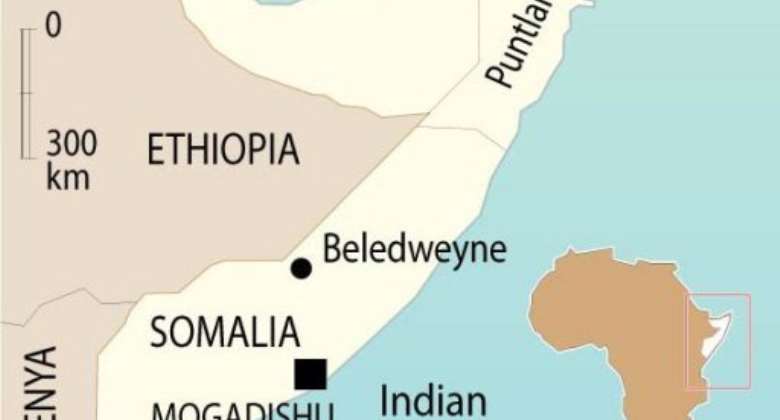 Beledweyne lies some 30 kilometres (18 miles) from the Ethiopian border. By (AFP/Graphics)

The Al Qaeda-inspired Shebab said they were reinforcing positions around Beledweyne, which lies on a strategic crossroads and is a vital trade lifeline for rebels also under attack in Somalia's south and in the capital Mogadishu.

Ethiopian forces alongside pro-government fighters wrested control of Beledweyne -- a large town about 30 kilometres (20 miles) from Ethiopia in central Somalia's Hiran region -- from the insurgents on Saturday.

"Hundreds of mujahedeen fighters are now heading towards Beledweyne, they will be confronting the invading enemy from Ethiopia and, God willing, the enemy will be crushed," said Sheikh Ibrahim Moalim, a Shebab commander in Hiran.

Somali government officials meanwhile claimed they were advancing on other positions held by the Al-Qaeda linked Shebab.

"The campaign for the liberation of the country from the Al-Shebab terror is gathering speed, as new fronts are opened against the terrorists," said Somali army chief General Abdulkarim Yusuf Adan in a statement.

Beledweyne is a key trading town leading from the Ethiopian border south into the capital Mogadishu, as well as lying on main route between north and south Somalia.

"The violent elements have been defeated, and they will have no place in this region to hide," said Mohamed Nur, a Somali security official.

"Our forces are closing in on Bulobarde, which is their only remaining base," Nur added, referring to a town some 80 kilometres (50 miles) south of Beledweyne.

"They have started fleeing, and in the coming hours we will secure the town. We will eliminate Al-Shebab completely from the region," he added.

Witnesses confirmed the troop movements in the region.

"People are concerned about the Ethiopian troops' advance on Bulobarde, and Al-Shebab are reinforcing their positions now," said Nuradin Abdulahi, a resident of Bulobarde.

"The Ethiopian troops have taken cover in big trenches, and I saw tanks moving into positions," said another witness, Abdikarin Ahmed.

Both witnesses said the Ethiopian forces also carried out security raids in Beledweyne district, arresting dozens of people allegedly linked to the Shebab.

Fighting in the Hiran region adds pressure to the hardline Shebab, who lost a key source of finance when they pulled out of fixed positions in the capital Mogadishu last August, switching to guerrilla attacks on African Union-backed forces there.

Now the extremist fighters largely rely for funding on the southern port of Kismayo and the charcoal trade, both of which are under pressure from Kenyan forces who crossed into southern Somalia to attack them in October.

Several hundred Ethiopian troops crossed into Somalia on November 19, according to several local residents, although Addis Ababa issued a denial.