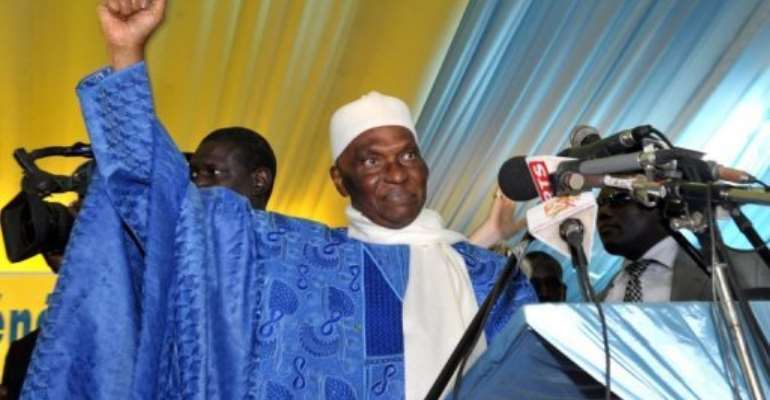 Wade accepted the nomination at a meeting of his PDS party in Dakar. By Seyllou (AFP)

The 85-year-old leader accepted his nomination at a special meeting of the ruling Senegalese Democratic Party in the capital Dakar, where the announcement prompted a new opposition protest.

Wade, first elected president in 2000, wants to run again despite strong domestic opposition and concerns from some Western countries that his candidacy could threaten the stability of Senegal, long considered one of Africa's most democratic nations.

Thursday's violence erupted on the eve of rival rallies by Wade supporters and opposition protesters angered by his bid for a third term.

Dias was summoned Friday by police, who said they had already questioned four of Wade's supporters.

Thousands of opponents headed to a square in Dakar on Friday after Wade's candidacy was announced. Demonstrators held signs bearing slogans such as: "Against Violation of the Constitution," "Wade Go Away" and "Rise Up Against the High Cost of Living!"

The rally was organised by the June 23 Movement (M23), a coalition of activists and political groups named after summer riots protesting proposed election law changes.

Wade's first term lasted seven years, and he was reelected in 2007 for five years after a constitutional reform shortened presidential terms.

The seven-year stint was reintroduced in another constitutional amendment in 2008, prompting the opposition to argue that Wade's fresh bid was illegal and that he had exhausted the two-term limit.

Opponents also claim that Wade is at least five years older than his stated age. His birthday is officially recorded as May 29, 1926.

This week, Senegalese media printed a letter that four members of the US Congress sent to Wade asking him not to seek reelection, saying that to do so could lead to more unrest.

While Wade has been credited with building roads, an airport and other key elements of infrastructure, the Senegal press has criticised him for excessive spending at a time when poverty and inequality remain stubborn problems.

Generally, Senegal has enjoyed a history of stability since independence from France in 1960, though the west African nation has seen social and political discontent grow in recent months.

But Casamance, a small region wedged in southern Senegal, has seen ongoing violence as government forces clash with rebels who want to secede from Senegal.

Vote for me to change the fortunes of Anyaa-Sowutuom — NPP P...
16 minutes ago