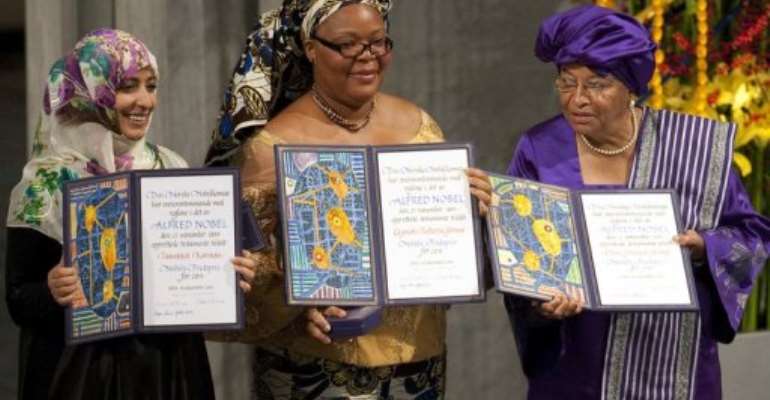 OSLO (AFP) - Liberia's president, a fellow Liberian and a Yemeni activist received the Nobel Peace Prize in Oslo Saturday for showing how women facing war and oppression can shed the mantle of victimhood and lead the way to peace and democracy.

"You represent one of the most important motive forces for change in today's world: the struggle for human rights in general and the struggle of women for equality and peace in particular," Norwegian Nobel Committee president Thorbjoern Jagland said before handing out the prestigious award.

At the lavish ceremony in a colourfully flower-decked Oslo city hall, and with Norway's royal family and other dignitaries in attendance, Liberian President Ellen Johnson Sirleaf, her compatriot and "peace warrior" Leymah Gbowee and Yemeni "Arab Spring" activist Tawakkol Karman received their gold medal and diploma.

"You give concrete meaning to the Chinese proverb which says that 'women hold up half of the sky'," Jagland told the laureates.

As Syrian security forces killed more civilians Saturday, the Nobel Committee chief said the laureates' work should serve as a warning to autocratic leaders such as those in Syria and Yemen.

"The leaders in Yemen and Syria who murder their people to retain their own power should take note of the following: mankind's quest for freedom and human rights can never stop," Jagland said.

Gbowee, a 39-year-old social worker who led Liberia's women to defy feared warlords and bring an end to her country's bloody 1989-2003 civil war, hailed the Nobel Committee for shining the spotlight on women's struggle for peace and human rights, insisting "this prize could not have come at a better time than this."

"It has come at a time when in many societies where women used to be the silent victims and objects of men's powers, women are throwing down the walls of repressive traditions with the invincible power of non-violence," Gbowee, wearing a colourful headdress, said in her acceptance speech.

"Women are using their broken bodies from hunger, poverty, desperation and destitution to stare down the barrel of the gun," she said, noting that "ordinary mothers are no longer begging for peace, but demanding peace, justice, equality and inclusion in political decision-making."

Gbowee, a mother of six who inspired Christian and Muslim women alike to wage a sex strike in 2002 and refuse to sleep with their husbands until the violence ended, pointed out that "we succeeded when no one thought we would, we were the conscience of the ones who had lost their consciences."

Sirleaf, Africa's first democratically elected woman president who last month won a second term, also hailed the Nobel Committee's focus on women's struggles after the world in recent decades has witnessed "unprecedented levels of cruelty directed against women" in places like the Democratic Republic of Congo, Rwanda, Sierra Leone and her own Liberia.

"The number of our sisters and daughters of all ages brutally defiled over the past two decades staggers the imagination, and the number of lives devastated by such evil defies comprehension," she said.

But in the face of such adversity, women still dare to stand up and fight for peace, said the 73-year-old grandmother, wearing a majestic purple dress and headdress.

An example of someone who found a powerful voice despite almost insurmountable odds is Karman, who at 32 is the youngest person to win the Peace Prize and the first Arab woman to receive a Nobel in any category.

The journalist and mother of three, wearing a white headscarf with a lilac and green pattern, expressed confidence that the "Arab Spring" uprising would succeed even in her country, where she helped push 33-year-ruler Ali Abdullah Saleh to agree to step down early next year.

"I see on the horizon a glimpse of a new world," she said, according to an English translation of her speech given in Arabic.

Karman however expressed frustration with the lack of Western support for the Yemen uprising.

"I should note that it did not get the international understanding, support or attention of the other revolutions in the region. This should haunt the world's conscience," she said, calling on the "democratic world, which has told us a lot about the virtues of democracy and good governance," to support people struggling for freedom.

"All of that is just hard labour during the birth of democracy which requires support and assistance, not fear and caution," she said.

Jagland meanwhile stressed the importance of women in the uprisings.

"The promising Arab Spring will become a new winter if women are again left out," he cautioned.

At a separate ceremony in Stockholm, the winners of the Nobel Prizes for Medicine, Physics, Chemistry, Literature and Economics were to receive their prizes later Saturday.