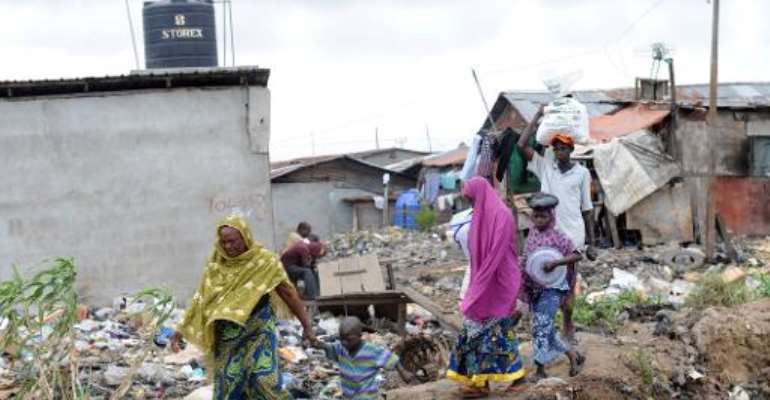 A mother and her child walk past shanty homes at Badia East slums in Lagos on August 12, 2013. By Pius Utomi Ekpei (AFP/File)

Lagos (AFP) - The Nigerian human rights body has said it would conduct public hearings into the demolition of houses and forced evictions by authorities across the country, which have been condemned by Amnesty International.

The public hearings will be held in November in the four major cities of Abuja, Lagos, Enugu and Kano, said the governing council of the state-sponsored National Human Rights Commission in a communique issued at the end of a two-day meeting in the capital city.

Officials demolished a large waterfront slum in the economic capital Lagos in mid-2012, a move that left thousands of people homeless.

The Makoko settlement consists of rows of shanties perched on stilts in the lagoon of Lagos, one of the world's largest cities with an estimated population of roughly 15 million.

The Lagos state government said in a letter to residents days before the demolition that their "unwholesome structures on the waterfront" amounted to an "environmental nuisance".

Amnesty International last year condemned the government of southern Rivers state for evicting without proper warning up to 20,000 people from a waterfront shanty community in the oil hub of Port Harcourt.

The Nigerian rights body also said it had looked into an interim report on the killings of alleged squatters in the Apo area of Abuja in September.

Nigerian forces claim they fought a gun battle with Islamist insurgents in the capital Abuja on September 20, but statements from witnesses and the US embassy suggest those involved were squatters.

Nigeria's main intelligence agency said Islamist Boko Haram fighters opened fire on security agents in the capital as the latter were searching for a weapons cache in a building under construction.

However, a security message from the US embassy about what appeared to be the same incident suggested those involved may in fact have been squatters.

Police in Abuja told AFP that a number of people were killed in the incident, but declined to provide figures.

Several witnesses injured in the shoot-out told AFP in an Abuja hospital that eight people were killed, describing the victims as unarmed squatters.

Nigerian security forces have been accused of major abuses, including the killing of civilians and arbitrary arrests, though they consistently deny the allegations.