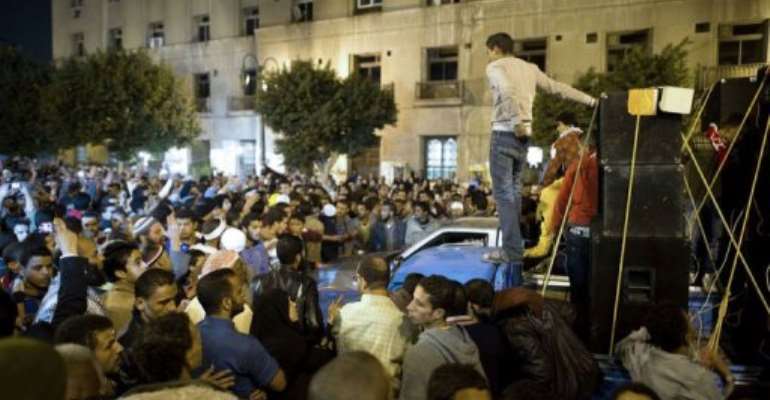 CAIRO (AFP) - Mohamed ElBaradei, who resigned from his post as vice president in Egypt's military-backed interim government in protest at Wednesday's bloodshed, is a respected former UN nuclear watchdog chief.

The ex-diplomat, UN executive and Nobel laureate turned liberal political leader stepped down after scores were killed in a crackdown by security forces on loyalists of ousted Islamist president Mohamed Morsi.

"It has become too difficult to continue bearing responsibility for decisions I do not agree with and whose consequences I fear," ElBaradei said.

He said his conscience was troubled over the loss of life "particularly as I believe it could have been avoided."

ElBaradei was named vice president after the army ousted Morsi on July 3. He had first been tipped to lead the cabinet, but that was rejected by the ultra-conservative Salafist party Al-Nur.

He returned to Egypt in 2010 after retiring as International Atomic Energy Agency (IAEA) chief, and he forged close ties with the liberal pro-democracy movement that spearheaded the overthrow of Hosni Mubarak's 30-year rule in February 2011.

In January 2012, his decision to quit the race for the presidency that Morsi won was seen as a slap in the face for post-Mubarak military rulers and one depriving liberals of a key champion.

Last June, he urged Morsi to resign after a year in office for the sake of national unity, ahead of record opposition-backed rallies calling on the Islamist leader to step down.

Rather than join a political party, the 71-year-old Nobel Peace laureate created a movement of his own to act as an umbrella for a range of opposition groups -- the National Association for Change.

But ElBaradei, while untainted by corruption allegations that surrounded Mubarak's circle, was criticised by opposition groups for having spent too much time abroad and being out of touch with Egypt's reality.

His 12 years as the public face of the UN nuclear watchdog nonetheless earned him respect at home.

Ahead of the 2003 US-led invasion of Iraq, he won admiration around the world and infuriated Washington by challenging claims that Saddam Hussein was hiding a secret nuclear programme.

No nuclear weapons were later found by US-led forces.

ElBaradei is not a noted orator, but has earned a reputation for speaking his mind. He has lambasted what he calls the double standards of countries which have nuclear weapons but prevent other states from obtaining them.

He was born on June 17, 1942, in Cairo, where his lawyer father headed the bar association, a position that sometimes put him at odds with then president Gamal Abdel Nasser.

Following in his father's footsteps, ElBaradei earned his law degree at the University of Cairo in 1962.

Two years later, he joined the diplomatic service. He was assigned to Egypt's missions in Geneva and in New York, where he earned a doctorate in international law and later taught.

He has written that his New York years were among his most formative, helping to broaden his world view.

As special assistant to the foreign minister, ElBaradei served on the negotiating team at the historic Camp David peace talks that led to Egypt's 1979 peace treaty with Israel.

ElBaradei began his UN career in 1980, and was sent to Iraq in the wake of the 1991 Gulf War over Kuwait to dismantle Saddam's nuclear programme.

In 1997, he was chosen as head of the IAEA, a role that gave him a global profile and led to confrontations with Washington, first over Iraq and later over Iran.

When Washington claimed Iraq was buying uranium in Africa, ElBaradei dismissed as fake the evidence before the UN Security Council.

The Washington Post reported that ElBaradei's Vienna telephone was bugged by the US Central Intelligence Agency.

In 2005, ElBaradei and the IAEA won the Nobel Peace Prize for their efforts "to prevent nuclear energy from being used for military purposes and to ensure that nuclear energy for peaceful purposes is used in the safest possible way."

ElBaradei, who is married to kindergarten teacher Aida Elkashef, has a son, Mostafa, and a daughter, Laila.