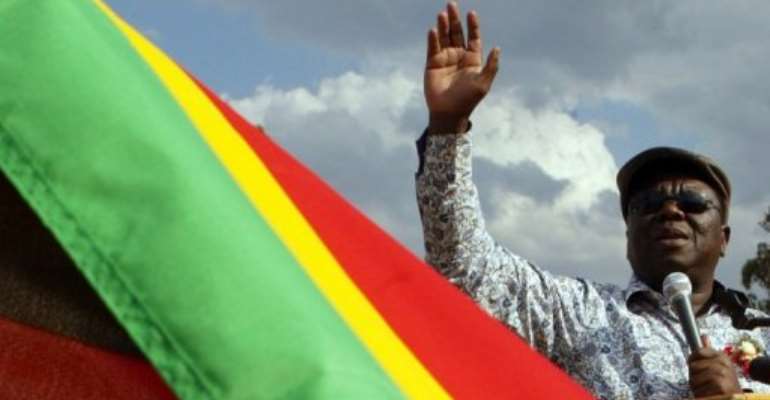 Two licences were handed late Thursday: one to a company owned by a vocal supporter of Mugabe; the other to a state-run media group regarded as his mouthpiece.

"Yesterday's granting of the two licences is the final nail in the coffin of media plurality in Zimbabwe. It is unacceptable," Tsvangirai's spokesman Luke Tamborinyoka said.

The Broadcasting Authority of Zimbabwe (BAZ), whose members have been the subject of a fierce dispute between the president and the prime minister, granted the licenses to Zimpapers and to AB Communications, owned by Mugabe backer Supa Mandiwanzira.

Tamborinyoka said the announcement "is a farce that flies in the face of true media reforms and media plurality in Zimbabwe."

Mandiwanzira was once a journalist on state television, who is now a businessman with close ties to ZANU-PF. Tamborinyoka said Mandiwanzira has been mooted as a ZANU-PF parliamentary candidate.

Mugabe and Tsvangirai had agreed to name new members to the BAZ, but the announcement came before the changes were made, the spokesman said.

Media in Zimbabwe have operated under strict rules for the last decade, with several newspapers forced to shut down while local journalists and foreign correspondents have been deported and harassed by police.

Media reform remains one of the key disagreements between Mugabe and Tsvangirai, who accuses the 87-year-old of riding roughshod over reforms agreed to in their ruling unity pact.

The country's state-run media were key propaganda tools in the flawed 2008 polls with Tsvangirai subject to regular attacks before the pair formed their tense power-sharing partnership in 2009.

"The radio licences given through the partisan BAZ were predictable. It was clear that the licences would be given to ZANU-PF apologists," said Douglas Mwonzora, spokesman for Tsvangirai's Movement for Democratic Change.

"The BAZ is clearly an illegitimate body, it must be reconstituted. Clearly the the airwaves have not been freed, this has maintained ZANU-PF's grip on the broadcasting sector," he told AFP.

Zimpapers are set to operate Zimpapers Talk Radio while AB Communications will open Zi Radio in the next six months.

They will be the first private radio stations in Zimbabwe, which has no independent television and bans foreign journalists from permanent work.

Several radio stations such as Voice of America and Radio Voice of the People broadcast into Zimbabwe via shortwave, but do not operate from the country.

Voice of the People, one of the unsuccessful applicants, has also seen its offices bombed.

Tabani Moyo, an advocacy officer for the Media Institute of Southern Africa (MISA), said the licences will not change government's hold on the media.

"The licensing of Zimpapers Talk Radio is set to raise eyebrows on whether the radio station will truly be independent... considering that the government has a controlling stake in Zimpapers," Moyo said.

"Former broadcast journalist, Supa Mandiwanzira, who was taken to task over his alleged links with ZANU-PF, is the majority shareholder and CEO of Zi fm stereo under the AB Communications stable."

Moyo said the awards were set to "question the sincerity of government's calls for Zimbabwean journalists manning foreign-based stations to return home and legalise their operations".