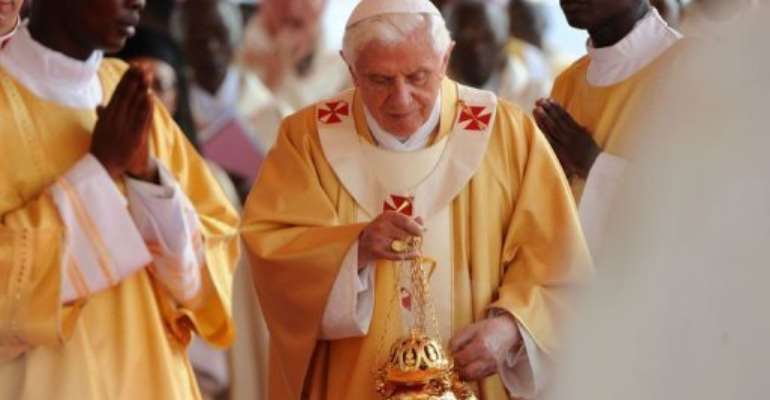 The mass capped off a three-day visit by the pontiff. By Vincenzo Pinto (AFP)

COTONOU (AFP) - Pope Benedict XVI ended his second trip to Africa on Sunday with a mass for tens of thousands in the voodoo heartland of Benin and by issuing a grand vision for his Church's future on the continent.

Benedict left the West African nation following a three-day visit that saw him denounce corruption, label AIDS a mainly ethical problem and encourage Africans to seek reconciliation in the face of conflicts.

For Sunday's mass celebrated by Benedict, some 50,000 people filled a stadium in Cotonou, the economic capital of Benin, a country considered both a heartland of voodoo and a bastion of Catholicism -- and where the two religions often mix.

Officials estimated another 30,000 people watched from outside the stadium, with the pope's mass projected on to giant screens.

Benedict arrived in his popemobile to a joyous welcome from the faithful, many wearing skirts or wraps with his picture. The 84-year-old pope received warm cheers when he took a baby in his arms.

Ahead of his arrival, the crowd applauded each time the sun appeared from behind the clouds, some crying out, "Jesus!"

Benedict told the crowd that they should work toward reconciliation in the face of conflict.

"Dear brothers and sisters of Africa, this land which sheltered the holy family, may you continue to cultivate Christian family values," he said.

"At a time when so many families are separated, in exile, grief-stricken as a result of unending conflicts, may you be artisans of reconciliation and hope."

On Saturday, Benedict had signed off on a roadmap for the Roman Catholic Church in Africa at a basilica in the city of Ouidah, a centre of voodoo, with the Temple of Pythons and its 30-odd snakes just across the street.

The document -- an apostolic exhortation called "The Pledge for Africa" containing conclusions from a 2009 synod of African bishops -- includes peace, reconciliation and justice as its main message.

He handed the roadmap over to bishops from throughout the continent on Sunday.

It calls for good governance and the abolition of the death penalty while denouncing abuses, particularly against women and children, and describing AIDS as a mainly ethical problem that requires a medical response.

Changes in behaviour are needed to combat the disease, including sexual abstinence and rejection of promiscuity, it adds.

The Catholic Church's position on AIDS and the use of condoms has long been controversial and carefully scrutinised, particularly in sub-Saharan Africa, home to nearly 70 percent of the world's HIV cases.

Benedict singled out those suffering with AIDS or other illnesses during Sunday's mass, expressing solidarity with them.

The pope's visit to the country was heavy in symbolism, in a region that served as a major slave-trading centre and coming 150 years after what is considered the evangelisation of Benin by missionaries.

Slaves departing from Ouidah and elsewhere took their traditional voodoo beliefs with them and transplanted them in the Americas.

Benedict's visit also occurred with the Roman Catholic Church facing a major challenge from evangelical movements that have made huge gains on the continent, attracting hundreds of thousands of followers.

At the same time, Africa also has the world's fastest-growing number of Catholics.

"I wanted to visit Africa once more," he said at the airport before his departure.

"It is a continent for which I have a special regard and affection, for I am deeply convinced that it is a land of hope.

"Here are found authentic values which have much to teach our world. They need only to spread and to blossom with God's help and the determination of Africans themselves."

He had cited Benin's democratic development and relatively peaceful cohabitation of religions in explaining reasons for visiting the country of some nine million people, which also has a sizeable Muslim population.

The pope's health seemed to hold up well throughout the trip despite intense heat and a packed schedule -- and he often seemed invigorated by the adoring crowds.