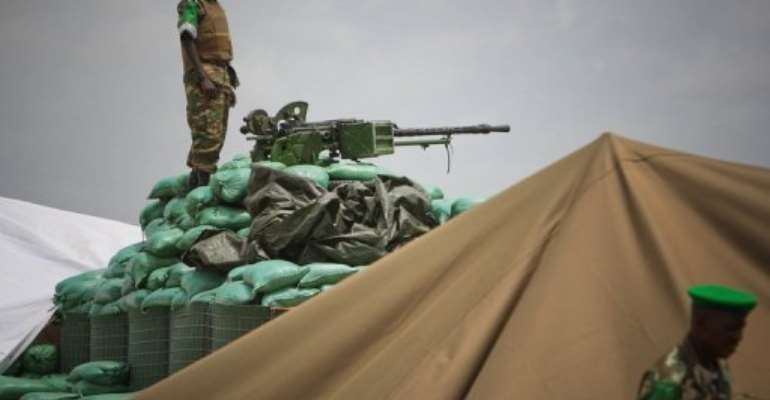 ADDIS ABABA (AFP) - The African Union renewed efforts Thursday to bolster its force protecting the embattled Somali government, a day after Kenya said it was willing to deploy troops for the bloc's mission.

The AU's Peace and Security Council held talks in the Ethiopian capital with Kenyan and other regional officials on ways to defeat Somalia's Islamist rebels and help stabilise the war-wracked Horn of Africa state.

"What we are asking the UN to do is enhance its support to the mission ... to make the mission more effective on the ground," he said, noting that the 9,700-strong AMISOM requires additional troops, funding and equipment.

To date only Burundi and Uganda of the AU's 54 members have supplied troops, despite calls to spread the burden across more countries.

The Kenyan presidency said Wednesday that a meeting between President Mwai Kibaki, his Ugandan and Somali counterparts "welcomed Kenya's willingness to deploy troops to AMISOM."

"In case a request is made, Kenya will avail a few of its battalions to join Uganda, Burundi and Djibouti to help keep peace in Somalia," Kenyan Foreign Minister Moses Wetangula told the BBC Thursday.

"We would go there to keep peace within the context of AMISOM. Kenyan troops would be under the command, the uniform and the hats of AMISOM."

"It's only discussions, no consultations will be made. We're waiting for a commitment," she said.

However, no details were announced at the end of the meeting.

Kenya has already acted in its own national interest by sending troops and tanks into southern Somalia to set up a buffer zone against the Shebab militia which controls most of the country and is blamed for recent attacks and kidnappings in Kenyan tourist areas.

Ethiopia invaded Somalia in 2006 with US backing, but pulled out three years later after failing to restore order in its lawless neighbour, which has lacked a functioning government for two decades.

AMISOM, whose commanders have repeatedly called for reinforcements, is tasked with protecting Somalia's weak Western-backed government, whose control is restricted to the capital Mogadishu.

But Mugume explained that having two international forces -- the Kenyan army and AMISOM -- operating separately in Somalia "could create difficulties" and consultations were under way to bring the Kenyan army under the AU banner.

"What they are looking at is bringing all of these forces together under the framework of AMISOM," Mugume said.

Last year, the UN Security Council approved an additional 3,000 soldiers, but other countries have declined to stump up troops, although Djibouti and Sierra Leone have promised to send soldiers.