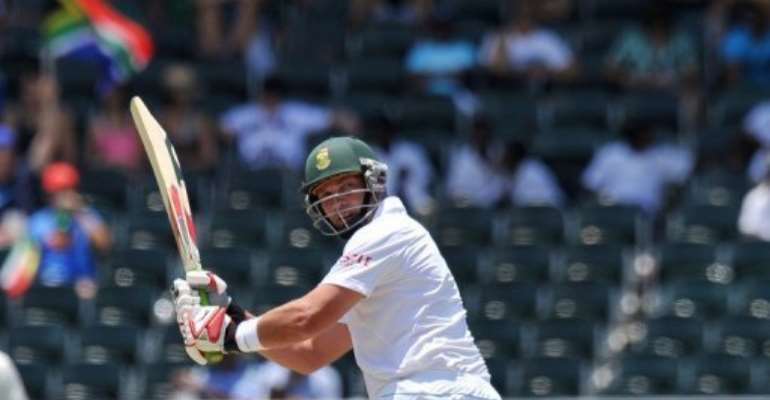 Jacques Kallis plays a stroke for South Africa against Australia at the Wanderers Stadium in Johannesburg today. By Alexander Joe (AFP)

JOHANNESBURG (AFP) - Australia's hopes of levelling the series soared as South Africa suffered a batting collapse on the first day of the second and final Test at the Wanderers Stadium here on Thursday.

South Africa were bowled out for 266, losing their last six wickets for 25 runs on a good pitch before bad light prevented the start of Australia's first innings.

Needing a win to share the honours after South Africa won the first Test in Cape Town by eight wickets, a depleted Australian bowling attack could not have hoped for a better day after losing the toss.

Fast bowler Ryan Harris could not play because of a back injury while all-rounder Shane Watson pulled up with a hamstring injury five balls into his fourth over.

Jacques Kallis, AB de Villiers and Ashwell Prince all made half-centuries for the host nation but failed to kick on, while South Africa's two best partnerships ended with both partners out in quick succession.

Kallis and Hashim Amla put on 80 for the third wicket before Kallis, who made a stroke-filled 54 off 41 balls, prodded a catch to midwicket.

He was followed soon afterwards by Amla, who played a loose drive against Pat Cummins to be caught at second slip after a patient innings of 19.

De Villiers and Prince added 112 for the fifth wicket before Prince's dismissal for 50, caught at mid-on off a poor shot against Nathan Lyon, sparked South Africa's collapse soon after tea.

Six balls later De Villiers went for an extravagant pull shot against Peter Siddle and was out for 64.

There was an impressive debut for 18-year-old Cummins, who generated good pace and claimed the wicket of Amla while conceding 38 runs in 15 overs.

Cummins also took an outstanding catch to dismiss De Villiers when he had to turn, chase and dive to hold a top-edged pull at mid-on.

On a Wanderers pitch with less grass than usual, South Africa scored at four runs an over in hot, clear weather as they reached 213 for four off 53 overs at tea.

A problem with the sightscreen advertising board delayed the resumption for 15 overs and the light faded as clouds came over the ground.

But the light could not be held responsible for the shots played by Prince and De Villiers, while the experienced wicketkeeper Mark Boucher also caused his own downfall with a top-edged hook against Siddle.

With South Africa eight down and the floodlights on, Clarke spoke to the umpires and decided to use himself in tandem with Lyon to avoid the players being taken off for bad light, which is probably what would have happened if he had persisted with his fast bowlers.

His boldness paid off as he took the last two wickets with his left- arm spin to put his side in a strong position.

At 18 years 193 days, Cummins became the second youngest Australian Test player after Ian Craig, who was 17 years 239 days when he made his debut, also against South Africa, at Melbourne in 1952/53.

Kallis joined Brian Lara of the West Indies as the joint fourth-highest run scorer in Tests when he hit the first ball he faced from Watson through the covers for four to take his total of runs to 11,953.

He took sole possession of fourth place when he scored a single in Watson's next over.

Kallis reached a 37-ball fifty with a flick for six off Siddle and a four in the next over took him past 12,000 runs in Tests, only for him to be out to the next ball.