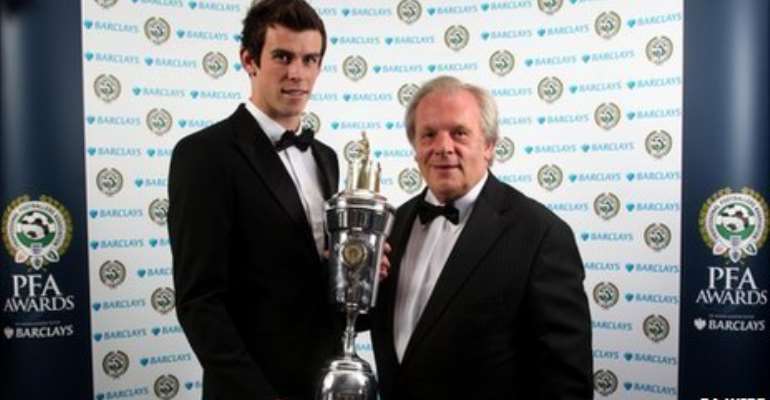 
Tottenham midfielder Gareth Bale has been voted player of the year by the Professional Footballers' Association.

The 21-year-old, who has scored 11 goals in 36 club games this season, is the fourth Welshman to win after Ian Rush, Mark Hughes and Ryan Giggs.

He said: "It is a honour really when you look at the names that have won it before and it just makes you go 'wow' really."

The young player of the year award went to Arsenal's Jack Wilshere, 19.

Despite being voted overall players' player of the year, Bale was beaten by his north London rival for the young player honour, for which Javier Hernandez, Nani, Nasri, Seamus Coleman and Joe Hart were also shortlisted.

"I am more than delighted really," he said. "It is a massive award and it is a great honour to receive, especially from other fellow professionals."

The award completes a remarkable turnaround for a player who at the start of 2010 was only on the fringes of the Spurs team.

At that point in his career he had yet to start a game for Spurs which they had gone on to win, and there was speculation about a move from White Hart Lane, but the left-sided attacking midfielder never doubted his abilities.

"At the beginning I wasn't really playing much and I always believed in myself that if I did get a run in the team - which I eventually did - that I would be able to prove what I can do," he added.

"That did happen and I kind of never really looked back from there. Playing in a good team with good players definitely helped me a lot and all the boys have been fantastic, the manager has been fantastic, giving me my chance, and it is something I want to improve on."

There is now transfer gossip of a different kind, with Bale being linked to some of the biggest clubs in Europe. However, he did sign a new contract last month which would keep him at the club until 2015.

Bale's run of form began towards the end of last season when an injury to Benoit Assou-Ekotto meant he was given a series of games in the first team.

In keeping with his attacking style, the only way was forward from there. Before the season was over he had scored winning goals against London rivals Arsenal and Chelsea and helped Spurs to fourth place and Champions League qualification.

It was his performances in Spurs' Champions League campaign, though, that really caught the eye and in particular, in particular a second half hat-trick against Inter Milan.

Ultimately it was to be in a losing cause, but it was the nature of his finishing and direct running that impressed many. He then followed it up with a man of the match display in the return fixture at White Hart Lane.

But despite the acclaim and the awards coming at such a young age, the Welshman remains down to earth.

He said: "There haven't been too many Welshmen to have won the trophy but it is great and it is great for me personally. And it is not just for me, it is for all my team-mates that have helped me through the season and it is kind of for everyone really."

He already has 27 caps for Wales and on making his debut against Trinidad and Tobago in June 2006 as a substitute, he became their youngest full-international at 16 years and 315 days.

Wilshere joined Arsenal from Luton when he was aged nine


The Arsenal and England midfielder has had a fine season, securing a place in the Gunners' first team and making his full international debut for England too.

He said: "It is my first full season and it is a massive award, especially from my fellow players, it is amazing.

"I am very proud to be the fifth recipient from Arsenal, it is good to keep this history going. Arsenal is a good club for bringing youngsters through and they keep proving it so I would like to thank the manager as well."

Having signed for Arsenal at just nine years old, going on to make an impression among the likes of Cesc Fabregas, Robin van Persie and Andrey Arshavin cannot have been easy, but Wilshere is now established in the first team.

As with Bale, Wilshere has shone in Europe despite his club coming unstuck against Spanish opposition.

In the two legs of Arsenal's Champions League quarter-final against Barcelona the central midfielder was one of Arsenal's better performers against a side which included Spain's world champions Xavi Hernandez and Andres Iniesta.

"I am a bit surprised," he added. "I always knew I could [win the award] but still it was a surprise how early it came. I am delighted just to be in the team to win an award, so I have to keep it up now and hopefully we can win something this year."