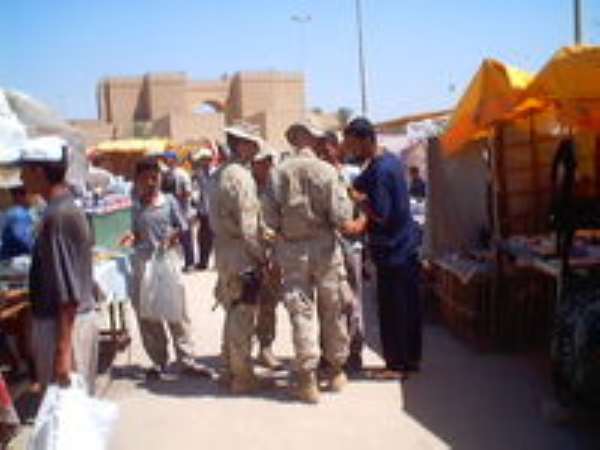 Western Museums are brimming with cultural heritage…from other countries. The Elgin Marbles are just one set of tens of thousands of artefacts looted from distant lands during colonial or imperialist times. However, the same desecration of cultural heritage continues. How many of the 13,000 artefacts stolen from Baghdad National Museum are today in the United States of America?

The list was drawn up and given to Vice-President Richard (Dick) Cheney before the first US or British soldier set foot in Iraq. It was a shopping list of archaeological treasures which the White House cronies wanted to see on their shelves in Rhode Island, in Maryland, in Virginia. UNESCO claims that when the Baghdad National Museum was looted in April 2003, 13,000 objects disappeared. How many of these are sitting in private homes in the USA?

Much was written about the theft of The Scream painting by Munch in Oslo, 1994. Yet what is the difference between the theft of a painting from a Museum and the wholesale pillage and desecration of cultural heritage perpetrated by invading powers over the centuries? As public interest in Ancient Egypt was revived during Napoleon Bonaparte's Expedition to Egypt (1798-1801), the Louvre's Department of Egyptian Antiquities was set up and “scholars” flocked to Egypt to fill their pockets in the same way in which US troops filled their suitcases in Iraq and Afghanistan, where Kabul National Museum, which once had one of the world's richest collections, has lost 90% of its artefacts. Where are they?

Yet not only the French and Americans are guilty of what amounts to wholesale looting of a country's cultural heritage, The British thought nothing of filling their museums with “spoils of war” from the French, which included the Rosetta Stone, today sitting in the British Museum alongside antiquities from Babylon, Greece, Rome, Assyria, Persia, Egypt. How were these “collections” put together?

Let us take as a possible answer the case of the Elgin Marbles, made to decorate the Parthenon after the victory against the Persians at Plataea in 479 BCE. During its troubled history the Parthenon was turned into a Christian church, then a Catholic Church (by the Franks), then a Mosque (by the Turks) and was blown up by the Venetian Commander Morosini. The British Ambassador to Athens from 1799-1803, Lord Elgin, obtained permission from the occupying Ottoman authorities to remove pieces from the Acropolis, which he shipped back to Britain. Among these were the “Elgin Marbles”

The British Parliament then debated the fate of the marble plaques, exonerated Lord Elgin from his act of vandalism and looting and the British Government bought them for the British Museum, where they have stayed since 1816.

This State-sponsored desecration has continued time and again throughout the centuries and throughout the world. Countless treasures from Latin America, from Africa, from Europe, from Asia have been stolen and carted off to foreign lands as part of private collections or worse, state-sponsored museums. The times of “This is ours and that is yours” as lines are drawn on maps apparently continue (cf. Kosovo).

Cultural heritage belongs to nobody while it belongs to everybody. If in the past Paris or London had the best conditions to house collections looted from abroad, today the globalization of knowledge has seen the possibility to construct excellent technical conditions to house the original collections in their places of origin where they belong, while faithful replicas are shown elsewhere.