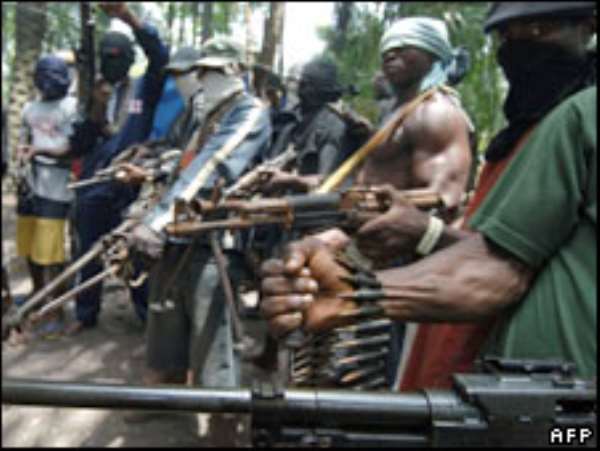 
The main rebel group in Nigeria's oil-rich Niger Delta says it is ending the ceasefire it declared last October.

The Movement for the Emancipation of the Delta (Mend) said it did not believe the government would restore control of resources to local people.

Mend has demanded that residents be given a greater share in profits from oil resources and land.

It warned oil companies to prepare for what it called an all-out onslaught against installations and personnel.

In a statement announcing the end of the ceasefire, Mend said that the decision had been taken "after careful consideration and extensive consultation".

"All companies related to the oil industry in the Niger Delta should prepare for an all-out onslaught," it went on.

"Nothing will be spared," it added.
Militants have carried out a series of attacks which have cost Nigeria millions in lost revenue over the years.

The attacks have meant that facilities in the area have been unable to work beyond two-thirds capacity, costing $1bn a month in lost revenue.

Despite the ceasefire, one Mend faction attacked a pipeline in December, saying it was a "warning strike" over what it called government delays in progressing with peace talks.

Talks have been held up by the long absence of President Umaru Yar'Adua in Saudi Arabia, where he has been undergoing medical treatment.