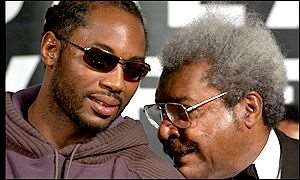 Lennox Lewis has announced he will be founding a garments factory in the country of Ghana in conjunction with American sportswear manufacturer FUBU. The three-time and reigning heavyweight champion of the world said the factory will manufacture garments for the local as well as the international market. London born Lewis arrived in the African nation with a 40-strong delegation to explore the possibilities of doing business in the country. Lewis also met with promoter Don King, who is probably keener than ever to sign the self-promoted champion. President Kufuor of Ghana said his country was proud to have someone like Lewis invest in the future of the country, and added that as an Anglo-African it was 'likely' that Lewis could trace his ancestry to Ghana.