Obama for vice-president… of Ghana?! 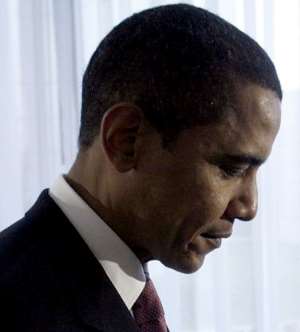 The nation of Ghana faces a presidential election that's almost the inverse of the election the US just experienced. Ghana experienced a transformational election in 2000 that brought opposition politician John Kufuor to power. In contrast to the US election in 2000, Ghana's election was largely smooth, trouble-free and fair. And Kufuor was re-elected by a healthy majority in 2004 and has been celebrated for the past eight years for a record of stability and economic growth.

Akufo-Addo is seen as a successor to Kufuor, who remains quite popular nationally and internationally. Professor Atta Mills served as vice-president to Jerry Rawlings, who took power in Ghana for the first time in 1979 and stepped down in 2000. There's some fear that Rawlings would be controlling an Atta Mills presidency - a fear Rawlings recently addressed while lambasting the ruling New Patriotic Party. Of course, Rawlings also insists that the 2004 election - widely viewed as free and fair - was rigged, suggesting that just a little bit of partisanship might affect the ageing leader's view of the world. And some of his statements do seem like he's do better just to shut up: "It is foolish talk that the NPP is going round propagating that I will control Mills and kill him if Ghanaians vote for Mills, and give power to my wife."

Because Ghana is blessed with a stable democracy and a free press, elections can be a pretty colorful affair. Joy Online reports that candy-sellers are doing a brisk business in sweets wrapped in partisan wrappers, the umbrella of the NDC and the elephant of the NPP. The other political parties, likely to get less than 2% of the vote, haven't merited their own sweets, and the sweet sellers explain that they're non-partisan, simply trying to make a buck… sorry, make a cedi. But this can get tricky: "'The selling of these has become political. An NPP faithful will not take kindly to it if you give them an NDC candy,' Maame Akua, a toffee seller at the Kwame Nkrumah Circle intimated."

Feeling the need to distinguish their candidate with something other than toffees, the NDC has begun an interesting electoral strategy. Instead of promoting a ticket of Professor Atta Mills and vice-presidential candidate John Mahama, the NDC has launched a new campaign with banners showing Atta Mills and US president-elect Barack Obama. According to reporters at the two major radio stations in Accra, NDC has also changed its election slogan to cement an Obama connection:

"The party has as well adopted a new slogan: 'Obama Nie, Atta Mills Nie', which translates 'This is Obama: This is Atta Mills' and printed it on its new campaign materials."

The connection isn't completely baseless, argues Isaac Yeboah of JoyFM - NDC is loosely associated with the Democratic Party in the US and the NPP with the Republicans, even sharing their elephant. But implying an Obama endorsement for the NDC is probably a bridge too far, and may reflect NDC panic at current polling numbers.

I'd call the Obama transition team and ask for their comment, but I somehow suspect they're a little busy…

More from Feature Article
ModernGhana Links
A Writer’s Block (On Purchasing Power And Purchasing Power)
Ghana has only one major problem which when effectively resolved, alll shall be well with her
Why Alban Bagbin Is Not Fit to Be Ghana’s Parliamentary Speaker
TOP STORIES