Son of Africa or ugly American? 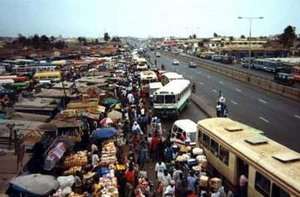 There's a new hit song in Ghana this spring. You hear it everywhere: in bars, restaurants, shops and taxicabs. It has a catchy rhythm, a melodic chorus, and a loud note of praise for an American presidential candidate.

The song is entitled simply "Barack Obama." Recorded by the Ghanaian reggae-rapper Blakk Rasta, it celebrates Obama's ascendance as a "great sign" for black people everywhere.

It joins a host of other pan-African musical tributes to Obama, from Jamaica and Trinidad to Cameroon and Kenya. Wherever you go, it would seem, people of African descent are grooving to the beat of Obamania.

But the Ghanaian song adds two starkly negative chords. Over the rat-a-tat-tat of simulated gunfire, it cautions Obama about white racists who could harm him. Then it warns that his entire nation faces doom on Judgment Day, because of "legalizing abortion in America."

Do listeners realize that Obama himself is a strong advocate of abortion rights? I don't know. But here's what I do know: Africans are deeply conservative on cultural issues, especially abortion and gay rights. And when they find out that Obama isn't, he might start to lose some of his luster.

Consider a recent column out of Uganda, where, as in most of Africa, abortion is prohibited by law. "The Democrats whom Obama wants to take to the White House are known for killing unborn babies," columnist Owen Kibenge declared.

Even worse, Kibenge continued, Obama supports civil unions and adoption rights for homosexual couples. "I am certain that the majority of Ugandans would not subscribe to this, even if it meant not voting for a black man," Kibenge added.

He might be right. And as Obama well knows, it's not just Africans who are conservative on these issues; African Americans are, too. That's why 30 percent of black voters in the so-called Bible Belt of northern Florida voted for George W. Bush in the 2004 elections, giving Bush a clear margin of victory in the state that nearly cost him the presidency four years earlier.

And that's why black pro-lifers recently staged a protest outside of a Planned Parenthood clinic in Washington, where they condemned Obama's stand on abortion.

"As Christians, we cannot vote for a man based on his skin color, but on the content of his character," one protester said, quoting the Martin Luther King, Jr. "If Obama supports abortion, then we cannot, we must not support him."

Come November, of course, the vast majority of African-Americans will cast their ballots for Obama. But as the contest tightens, even a small number of black defections could swing the election to John McCain.

Obama knows that. That's why he agreed to appear at a 2007 South Carolina rally with the "ex-gay" gospel singer Donnie McClurkin, who says God "delivered" him from homosexuality. And it's probably why he opposes gay marriage, even though he backs civil unions and voted against the Federal Marriage Amendment. "I'm a Christian," Obama told a Chicago reporter last year. "I do believe in that tradition, and my religious beliefs say that marriage is something sanctified between a man and a woman."

But that won't be enough to satisfy some conservatives in the African-American community, where, as Obama has admitted, "homophobic attitudes" run deep. And it certainly won't win Obama much favor here in Africa, once more people find out about his position on gay rights.

Remember, in most African countries, all homosexual activity is illegal. In Kenya, the birthplace of Obama's father, gay sex is punishable by five to 14 years in jail. It carries a penalty of up to 10 years' imprisonment in Zimbabwe, where President Robert Mugabe has charged that "gay gangsters" from the West are conspiring against his regime. For the record, Mugabe says that homosexuality is a "white disease."

That's also what you hear in Ghana, which banned a proposed conference of gays and lesbians in 2006. As one government spokesman explained, homosexuality "violently offends the culture, morality, and heritage of the entire people of Ghana."

Never mind that same-sex love has a long history throughout Africa, or that Ghana has a small but brave gay-rights movement. Ghanaians insist that homosexuality is a depraved import from the West, especially from America.

"America is a sick society today because of overindulgence in freedom and liberty," a local columnist wrote last year, denouncing the gay-rights campaign. "Perhaps this is one cultural change that Africa is refusing to accept."

Soon, perhaps, more Africans might also refuse to accept Barack Obama. Across the continent, to be sure, airwaves will continue to praise this "son of Africa," as the Ghanaian hit record calls him. But as they learn more about Obama's ideas, especially on hot-button cultural questions, Africans could start humming a different song. Stay tuned.

Jonathan Zimmerman, a professor of education and history at New York University, is teaching this semester at NYU's study-abroad program in Accra, Ghana. He is the author of the forthcoming "Small Wonder: The Little Red Schoolhouse in History and Memory."