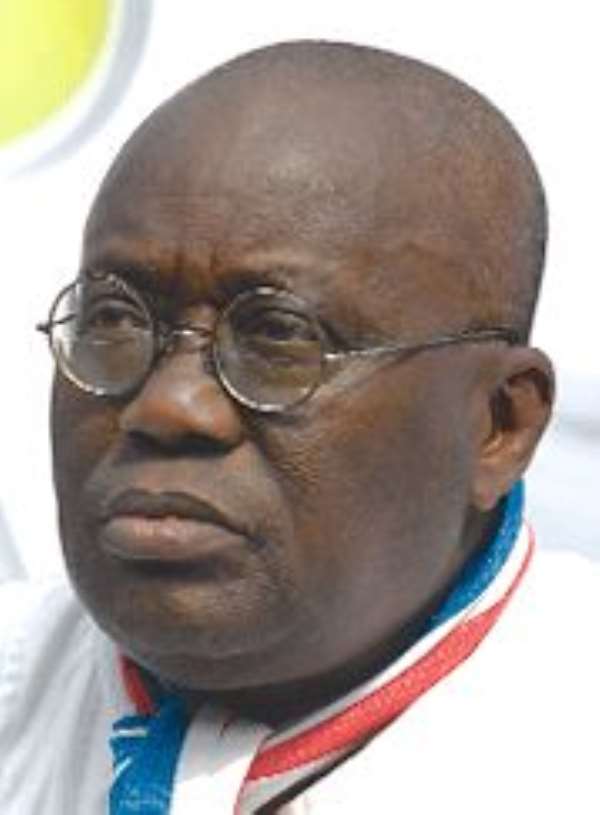 The flag bearer of the New Patriotic Party (NPP), Nana Addo-Dankwa Akufo-Addo, has stated that Ghana is ready to take the lead to become the model successful nation the world is looking forward to.

He said after intense implementation of the good economic policies for the country over the last eight years, which had been of immense benefit to the citizenry, the next stage of the nation's socio-economic development was to embark on a vigorous industrial transformation that would focus primarily on processing raw materials for export.


Nana Akufo-Addo was speaking at a thanksgiving dinner organised in London by the UK and Ireland branch of the NPP to enable the flagbearer to thank Ghanaians in the UK on his election in December last year.


The well-attended event by both Ghanaians and non-Ghanaians also served as a forum for the presidential hopeful to outline some of his projected plans for Ghana.


It was a real exposition of merry-making, rather than the usual fund raising. Nana Akufo-Addo took to the dancing floor with a newly composed tune for his campaign expressing his appreciation to his country men.


He was mobbed, and at some point, had a difficulty in moving forward to continue exhibiting his highlife dancing dexterity, which was hugely applauded by the large crowd, including the Minister for Lands, Forestry and Mines, Mrs Esther Obeng Dapaah.


The flag bearer noted that the party was strongly development and business-oriented, and that this vision would be dynamically pursued until the people of Ghana were happy with their economy.


Nana Akufo-Addo stated that the party, through the leadership of President J.A. Kufuor, had created an environment that had made Ghanaian enterprises much more competitive.


He, therefore, expressed his desire to provide productive avenues for more development, adding that "on January 7, 2009, President J.A. Kufuor will hand over the sword of the state to President Nana Addo Dankwah Akufo-Addo for me to do what the NDC could not do."


The presidential hopeful expressed disgust at the nation's continuous dependence on foreign donors and said "that must not continue to happen".


He catalouged the achievements of his party during its eight-year governance and recalled that Ghanaians were currently freer than they were at any other time in the history of the nation.


He observed that "when citizens are given their freedom, they become responsible to civic duties, and national development became easy by way of participation".


Nana Akufo-Addo told the gathering that there was the need to look back at the achievements of the nation, so that it would spur the people on to attain greater heights.

He was, however, quick to caution that there was no room for complacency, but hard work and unity, which according to him, would make Ghana a middle-income nation in no distant future.

The party's branch Chairman, Mr Hayford Atta-Krufi, in his welcoming address, said the dinner was still part of the reunion of all Ghanaians to rally behind Nana Akufo-Addo to win the December elections, given the assurance that it was only the party that could help develop the nation as it had already proved over the past eight years.

Desist from faking kidnapping to avoid imprisonment – Police...
10 minutes ago