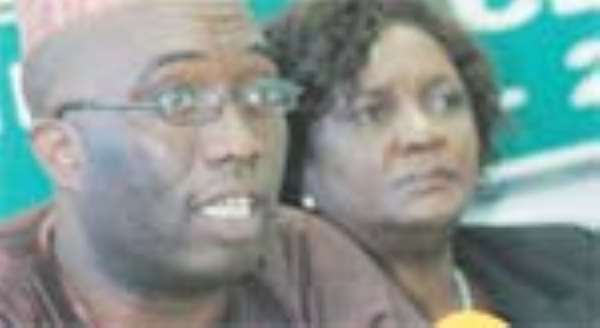 MR. ISSAKA Issifu, Counsellor at the Consular Affairs Department of the Ghana Embassy in Tokyo, Japan, has disappeared.

Credible information from sources close to the Ministry of Information indicates that the diplomat went AWOL since April this year and all attempts to locate him have proved futile.

His disappearance comes in the wake of series of alleged criminal activities including gambling, attempted stealing and impersonation imputed to him while he was at the Mission.

He has consequently been considered a deserter, more so when he disappeared from the Mission without handing over his ID card and keys to an official car and office cabinet.

A committee, instituted to investigate activities at the Mission, recommended that he should be dismissed with immediate effect for indulging in activities detrimental to the image of the nation. The committee again recommended his arrest and prosecution anytime he steps on Ghanaian soil.

The recommendations are, however, subject to the President's approval.

Mr. Issaka Issifu was, apart from diverting 300 bicycles donated by the Japanese people, alleged to have incited and organized sabotage and physical attacks on the Mission, resulting in injury to two members of staff and damage to state property.

The embattled counselor, who became a thorn in the flesh of the Mission, was said to have converted a house he had rented into a gambling centre, an act which is criminal in Japan.

The Ambassador now has to move to put a stop to the hiring of the house.

As if that was not enough, Issaka was alleged to have lodged visa fees amounting to ¥7.225 million ($59,000) in his personal account at a local bank in Japan. He only returned the money after a warning from the Ambassador.

These and other startling revelations were contained in a Confidential Report sighted by DAILY GUIDE.

According to the report, the diplomat, in December 2006, presented himself as the Ambassador at the Ghanaian Embassy when he visited Ofunato City for a festival.

He used the occasion to request for bicycles for Ghana, a request which the Mayor of the city granted and 300 bicycles were given to him to be sent to Ghana, but up till now, nobody knows the whereabouts of the bicycles.

The report further revealed that in January this year, the Research Department wrote a letter to Issaka asking him to return home by April 30, 2007.

This did not go down well with him and on March 23rd, he informed his colleague Muslims and other Ghanaian friends living in Tokyo about the letter, after which they invaded the embassy to register their displeasure.

On April 13th, the Muslim brothers again invaded the embassy with more protestations on behalf of Issaka and tried to speak on the official phone with the Minister of Foreign Affairs, Regional Integration and NEPAD, a request which some members of staff resisted.

In the ensuing melee, two of the officers were seriously assaulted by one of the protesters, and this has affected the hearing in one of the victim's right ear. The embassy's photocopier was also damaged.

The report stated that on that same night, Issifu took some medication on an empty stomach and overslept in the chancellery, but claimed he had been detained.

He instructed his girlfriend in the night on phone to call Gariba, the leader of the protesters.

The following day, April 14th, Gariba and his group arrived at the embassy with the Japanese Police, Ambulance and Fire Service to rescue Issaka, who claimed he had been detained in the embassy overnight.

This, according to the report, was a ploy aimed at embarrassing the Ambassador, Dr Barfuor Adjei-Bawuah, and the Mission because it was Issaka himself who opened the door from inside for the 'rescue team' when it arrived.

Ironically, it was Issaka who first made a complaint of his detention to the Foreign Ministry before another report came from the head of the Mission in Tokyo indicting the counselor.

These developments prompted the formation of an investigative committee, but for the two weeks that it worked on the complaints in Japan, the members did not meet Issaka.

Even though the whereabouts of Issaka Issifu is still unknown, he is rumoured to have been in hiding in the United States of America.