Ghana at 50: Why Ghanaians must weep! 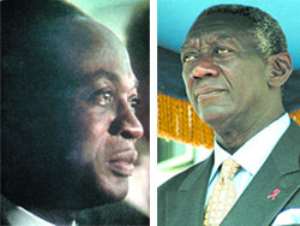 THE TRUTH of these words: GHANA AT 50: WHY GHANAIANS MUST WEEP is beyond doubt. Even when pressed by the demands of inner truth, men do not easily assume the task of writing or asking people to weep during a year of jubilee, when we have more foreign people visiting us.
Nor does the human spirit move without great difficulty against all the apathy of conformist thought within one's own bosom and in the surrounding world.

Moreover, when the issues at hand seem as perplexing as they often do in the case of our fifty years celebration, we are always on the verge of being mesmerized by uncertainty. As the great Harlem poet Langston Hughes wrote in his poem, Let America Be American Again that 'O, yes, I say it plain' that Ghanaians must weep.

In 1963 when US President John Fitzgerald Kennedy was assassinated, the New York Times on 24th November, 1963 carried a front page headline: KENNEDY IS KILLED BY A SNIPER AS HIS MOTORCADE WADES THROUGH DALLAS, TEXAS. Another front-page headline was: WHY AMERICANS MUST WEEP. In the story, filed by wartime journalist Harrison Salisbury, he said that America must weep because the warm glow of ideas of JFK's New Frontiers had been truncated by the assassin's unrelenting bullet. Americans needed to weep because the dream of bringing all Americans who lived on the outskirts of the great vault of material prosperity to the metropolis of secured living had been shattered.

STILL DEPENDENT Ghanaians must weep now because after fifty years of independence we are still not a free people and a free nation. Though we are politically independent to take decisions, in the rest of our collective lives as a nation, we are still dependent on other countries. We still depend on our former colonial masters and their allies to make a living. Without them we cannot make progress in our national development agenda. They finance our road construction, presidential palaces and even they may have lent us the US $20 million for our golden jubilee.

In the days of slavery and colonialism, the chains were tied to our legs. Today we do have our minds still chained. We have unconsciously accepted it that everything that they manufacture is superior and everything that we manufacture is inferior. As Martin Luther King Jr said 'as long as the mind is enslaved, the body can never be free. Psychological freedom, a firm sense of self-esteem, is the most powerful weapon against the long night of physical slavery.'

Ghanaians must weep because a nation that was so rich that it could even lend to others after independence, is now poor and always begging. A nation sitting on the abundance of gold and other natural resources one time became a chartered member of the Highly Indebted Poor Countries (HIPC). We also have obtained credit worthiness plus through our borrowing and re-payment.

STILL DIVIDED At 50, Ghana, though we are a geographically sovereign nation, bounded in the North by Burkina Faso, on the East by Togo and the West by Cote d' Ivoire yet are not a nation of one people. Ghana is a nation because we are represented at the United Nations, Africa Union etc by a representative. But deep within the nation, the people are divided on ethnic lines and political lines. We are never united in our nation. After 50 years the divisions that existed some fifty years ago between the United Gold Coast Convention (UGCC) and the Convention People's Party (CPP) now manifests itself between the New Patriotic Party and the National Democratic Congress. There are times when Ghana is momentarily a nation-when for example we win international football matches. The rest of the time, we remain divided. Ghanaians must weep because for fifty years we have not been able to come together to find a common purpose for the nation.

There is nothing like Ghana. Everything is either NPP or NDC. At this period of celebration, instead of celebrating the golden jubilee in unity, some still feel so marginalized in the celebration that they wanted to take to the streets on March 6th to register their disapproval. At a time like this, even birds of the air, the fishes in the sea and game in the forest have all united to celebrate the golden jubilee together yet we who are in the direct image of God to know better, always find cause to complain.

BAD STEWARDS Ghanaians must weep because after 50 years we have not been very good stewards of national assets and state owned enterprises entrusted to us as a nation after independence. We have almost left everything to collapse including the likes of the jute and shoe factories in Kumasi, meat factory in Bolgatanga, tomato factory in Pwalugu, Aboso Glass Factory just to mention the few. Our railway sector, which was once the preferred choice of transport -bustling with passengers and goods- have been left to decay. We could not even add a centimeter of track line to what was left by the colonial masters until last weekend when cabinet approved an extension of a dual rail network to link Paga. I do not know whether this is one of the 'in the pipeline' statements which drip from the mouths of our leaders.

MISPLACED PRIORITIES Ghanaians must weep because as a nation we have not identified our priorities. Misplaced priorities have littered our focus. When you think about this, you may ask: why should we buy 200 vehicles costing nearly US$ 6million when we could have hired them for US$ 250,000? This apparent misplacement of priorities appears to be a national problem. In our universities for instance, purchases of cars appear to be more of a priority than the purchase of laboratory equipment for teaching and learning. Sometimes, the best alternative is not outright purchase but rather hiring them when the need comes. You can rent a pick-up, land cruiser and coaster bus but you cannot get any laboratory equipment to rent in this country.

As a nation, identifying our needs is important. Is our most pressing need providing energy for industries or committing scarce resources to do flamboyant celebrations and later saddle ourselves with debt? I have seen countless numbers of couples who have gone to borrow money from banks and friends to do ostentatious weddings and later have to struggle to pay the loan.

THE STATE OF OUR EDUCATION Ghanaians must weep because we cannot boast of a world-class education system. Though with the coming of the PNDC Educational Reform Programme more schools have been built and access to education has increased, yet we are still faced with the fact that we are producing ceremonial graduates as against career graduates. If you happen to go through Basic Education Certificate Examination (BECE) scripts you would weep because people who have been in a formal education for nearly a decade cannot even write their names, not to talk about using simple sentences to describe who they are.

Ghanaians must weep because the state has even stopped giving subventions to universities and other tertiary institutions. The state of education in the country would have been in a severe coma if it had not been for GETFund. The neglect of tertiary education or little attention given by the state to tertiary education is due to the fact that we go to borrow money from Western powers to develop and expand our education. Should we be able to train and produce engineers and scientists like universities such as Stanford, Yale, Harvard, Massachusetts Institute of Technology (MIT), Cambridge, Oxford are producing, a time would come when we would be able to make a giant leap in our nation in terms of industrial and scientific renaissance. When this happens we would not be buying their products, we would not be borrowing from them and even calling them masters.

It is no wonder almost all donor assistance to our education ends up at the primary level. Universal primary education is important but we do not build a nation with JSS graduates. We need to find and generate all that is needed to finance our education especially tertiary education and commit huge sums of money to do research. Today we must weep because this is still not being done.

BRAIN DRAIN At fifty we must weep because we have not been able to motivate our best brains to stay in the country and contribute their quota towards the development of the nation. Now the national economy is largely controlled by people in the informal sector most of whom have limited education. Day by day we are haemorrhaging our doctors, nurses, pharmacist, engineers etc. The brain drain is as a result of push and pull factors. We can do little about the pull factor but the push factor, we have control over it and yet we seem to be doing nothing. Those who decide to stay and contribute their quota go through a whole lot of frustrations.

CONCLUSION When I was child growing up in the streets of Kumasi, my pastor used to quote Jesus saying 'Daughters of Jerusalem do not weep for me but weep for yourself and children'. As a child I did not quite understand it but now I understand better why Jesus told them to weep. We must weep because we do not have anything to celebrate. We are just celebrating the mere passage of fifty calendar years.

More Feature Article
ModernGhana Links
The Day Lions From Ahanta Mounted The Podium In Rome To Say Their Own Stories
Bringing Quality To The Services We Pay For
Benefits of Mahama's Nkrumah Interchange to Ghana
Is Mahamudu Bawumia Being Forced to Resign from the New Patriotic Party?
The British Art of Black Propaganda
A Leader Is Always Prepared!
Newly Enstooled Elmina Chief of Tourism Choice of Colors Explained
Brutality & Suzerainty Wars: Signs Of Killer Instinct Out Of Insecurity
The Treacherous Notion of Insulting Religious Sensibilities
TOP STORIES