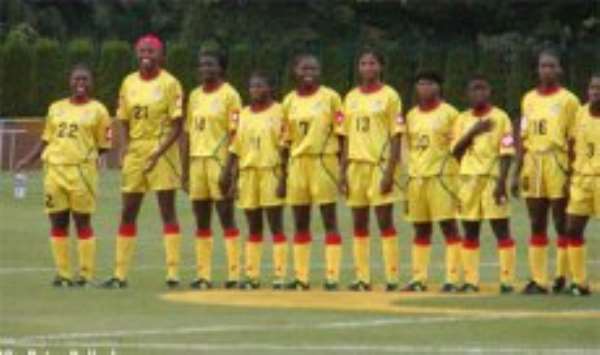 The women's Olympic qualifying series begins over the weekend for Africa's sixteen nations vying for the single slot to compete for honours in the Beijing Games.

Ghana narrowly missed out of the 2004 Athens Olympic Games after failing to clear the hurdle in the last qualifier when they fell to Nigeria.

The women's Olympic team would leave Accra on Valentine's Day for the first leg game of the 2008 Beijing Olympic Games competition in Luanda over the weekend.

Ghana's women's team play away to Angola in the first round of qualifiers for the Beijing Games on Saturday and would host the return leg on March 11.

However, team coach Isaac Paha is confident of Ghana's chances in the first leg.

“Our chances are bright because I am confident we have what it takes to win," Paha says.

Ghana's women's footballers last month commenced preparations for the 2008 Beijing Olympic Games qualifiers with the call up of thirty players by Black Queens coach, Isaac Paha to the national camp in Prampram.

Isaac Paha and his backroom staff are bent on ensuring that Ghana makes her debut in the Women's football competition at the Olympics as they attempt to pick Africa's sole ticket.

They would first have to win over the Angolans as Paha exhumes enough confidence in his ladies.

"Our strength is the players' ability to move around and play in different positions at any given time.

"I am convinced that with this kind of strength, we can get a positive result on Sunday."

Africa has a single slot for the Olympic Games and the 16 nations competing in the qualifiers this weekend are seeking to pick the sole ticket.

Aside the single slot for Africa, the runners-up from the CONCACAF and CAF qualifiers would be compete in a one-off decider for a place in the Olympic competition.