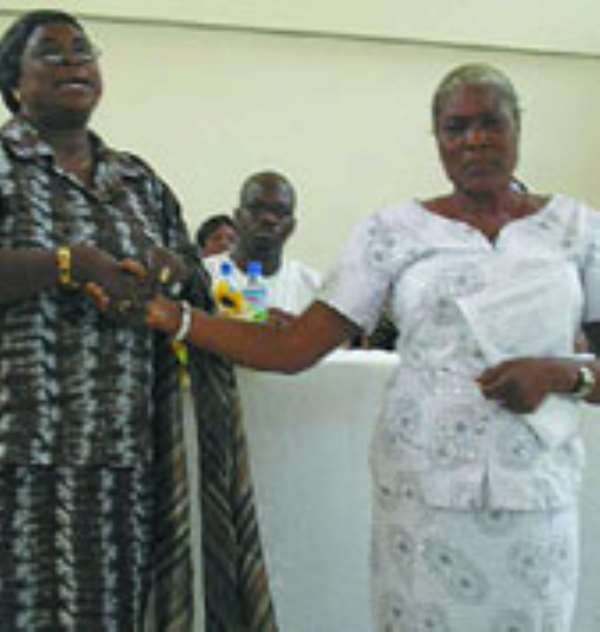 Ms Arhin polled 49 votes representing 83% of the 59 votes cast as against nine opposing votes, while one vote was rejected.

She was carried shoulder high after Nana Amba Eyiaba, Board Member of the Electoral Commission declared her the winner.

A Supervising Cape Coast High Court Judge, Justice Erasmus Gyinaye, swore in Ms. Arhin.
The nomination of Ms Arhin sparked off controversies among ruling New Patriotic Party (NPP) Members in Cape Coast, with one faction threatening court action against the election of Ms Arhin as of the end of Tuesday.

The court action was intended to stop the election, even on Wednesday, but critics of Ms Arhin were unable to file a motion at the Cape Coast High Court.

“Even if they had filed a motion by ex-parte, the court cannot move it that very day (Wednesday) before the election could be held,” Hon. Philemon Biney, Assembly Member of Enyitsewdo Electoral Area told The Chronicle.

Before the election, Hon. Edwin Godwin Buckman, Presiding Member of CCMA, urged the Members of the Assembly to use their powers to move Cape Coast forward.
He said Cape Coast's development behoves the Assembly Members and therefore they should not disappoint Cape Coasters.

In her pre-election speech, Ms Arhin, who showed her Fante poetry prowess, asked the Assembly Members to think about Cape Coast first and endorse her nomination.

Mr. Kofi Adusei Poku, Deputy Local Government, Rural Development and Environment Minister, commended the Assembly Members for endorsing Ms Arhin, indicating that it was an indication of the confidence the people had in President John Agyekum Kufuor.

Among those present at the CCMA new Assembly building to witness the assembly's decision on the nominee were Nana Kofi Coomson, Chief Executive Officer of The Chronicle and General Portfolio Limited, whose presence sent many thronging to this reporter to enquire why he was there.

Other journalists probed this reporter further as to whether Nana Coomson was there to render support or was there to move his Parliamentary aspiration being speculated in the Municipality.

Meanwhile, The Chronicle has learnt that the wife of late Muniru Arafat is still occupying the MCE's residence, raising eyebrows as to where Ms. Arhin would be staying.

This is because the three-bedroom house being put up by government for late Arafat's wife at Cape Coast Polytechnic area was yet to be completed.