Macron praises Qatar for World Cup and Egypt for COP27 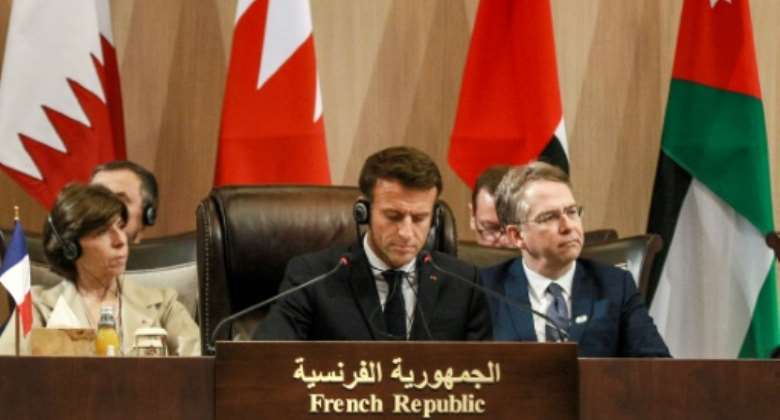 French President Emmanuel Macron attends the "Baghdad Conference for Cooperation and Partnership" in Sweimeh in Jordan on Tuesday. By Khalil MAZRAAWI (AFP)

French President Emmanuel Macron on Tuesday congratulated Qatar and his "friend" Egyptian President Abdel Fattah al-Sisi for hosting the World Cup and COP27, at the risk of drawing criticism at home.

"As we conclude a World Cup that is the first in the Arab world and that was held in Qatar, I congratulate them," he said at a Middle East summit at Sweimeh, a resort on the shores of the Dead Sea in Jordan.

"I congratulate my friend President Sisi, because Sharm el-Sheikh succeeded in bringing the world together and solving part of the issue of loss and damage which was absolutely key," Macron said, referring to the COP27 climate conference.

"The next COP will be held in the United Arab Emirates, which shows how much the region is becoming a diplomatic epicentre," he added.

COP27 concluded with the adoption of a hotly contested text on aid to poor countries affected by climate change, but also failure to set new ambitions for lowering greenhouse gas emissions.

Macron has been sharply criticised by the French opposition for visiting Qatar twice to support the French national team and for complimenting the event's organisers.

Qatar has faced international criticism over its human rights record and the environmental impact of air-conditioned stadiums at the World Cup, which ended on Sunday.

The gas-rich Gulf state is also at the centre of an investigation into high-profile corruption allegations at the European Parliament.

"I'm totally comfortable with it," Macron said of his trip to Qatar to see France defeat Morocco in the World Cup semi-final, before they lost to Argentina in Sunday's final.

Macron has also come under fire over his links with the Egyptian president despite repression in the North African country.

In December 2020, Macron awarded Sisi his country's highest honour, the Grand Cross of the Legion of Honour, in a move that left rights activists aghast.