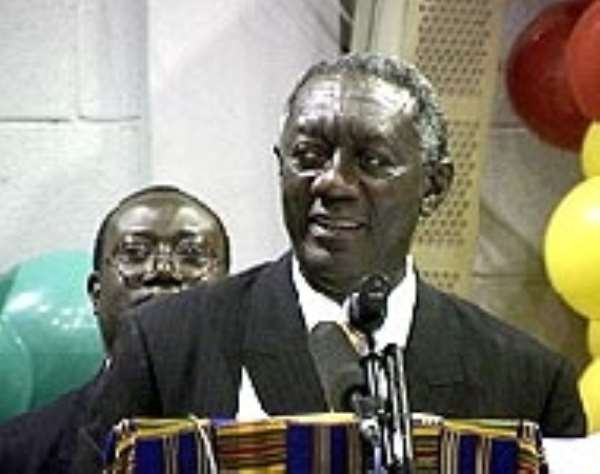 President John Agyekum Kufuor has inaugurated the Ahafo Mine of Newmont Ghana Limited, with a call on the company to regularly use the services of local sub-contractors as well as those of the domestic financial sector, including the banks, in its operations.

He also urged the company to consider getting listed on the Ghana Stock Exchange.

Noting that much was expected of the company in terms of business social responsibility to the local stakeholders, he tasked the management, with its high international profile, to fit well into the partnership with Government and other stakeholders in developing the Ghanaian economy.

Newmont, which started operations about four years ago, poured its first gold in July, this year and is expected to produce approximately 550,000 ounces of gold annually.

The President stressed the need for mining companies in the country to operate within the confines of the new Minerals and Mining Act, which reflects government's commitment to good governance in all areas of national endeavour.

This, he said, was very important because the "Act's critical feature is the transparency that it introduces into the mining industry and the level of responsibility that it demands of all stakeholders.

"Geologically the country is well-known to be gold-laden in nearly all parts. This is why the policy is to encourage investors who come in with know-how, capital, enhanced job creation and a heightened sense of responsibility, especially to their areas of operation, to partner the state and the people to our mutual benefit," President Kufuor added.

He called on the chiefs and people in the area to give the management maximum support and all the co-operation it needed.

On the issue of the current energy crises, President Kufuor said government was committed to quickly overcoming the insecurities in the sector, adding "government is taking serious and urgent measures to implement policies that would double the sector's capacity within three to five years".

The Vice-President of the company, in-charge of Africa Operations, Mr. Bill Zisch, indicated that as at October, this year, the company had paid to the government 1.4 million US dollars as royalties.

He said the company's gold reserves in the Ahafo area were about 12 million ounces, which would be mined within a period of 2-years.

Mr. Wayne Murdy, Chairman and Chief Executive of Newmont Mining Corporation expressed appreciation for the hospitality that the company had received from the Government and its agencies, the chiefs and people in the communities where the company's projects were located.

He noted that many people, mostly Ghanaians, had contributed to the development and construction of the Ahafo mine.

"Ghana is a good place for our first gold mine on the African Continent; and not only that but is also a peace setter in democracy on the continent", he added.

Why won't National Security operatives assault journalists i...
21 minutes ago