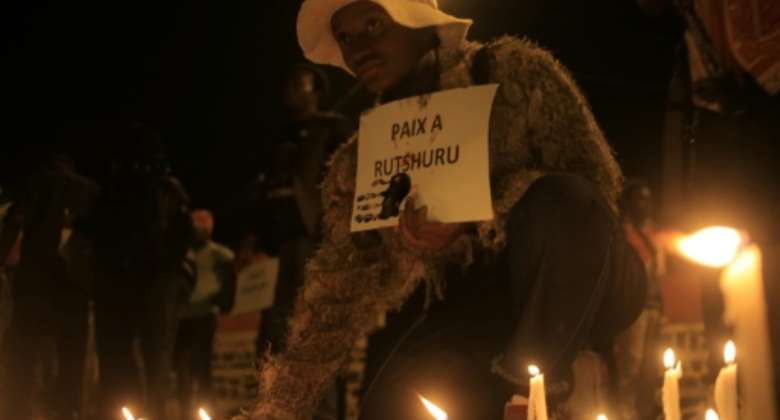 A prayer vigil on Wednesday in the eastern Congolese city of Beni. The sign reads 'Peace in Rutshuru,' a territory that has been devastated by the fighting. By SÃ©bastien KITSA MUSAYI (AFP)

M23 rebels last month massacred at least 131 civilians in eastern DR Congo and committed more than two dozen rapes, according to a preliminary probe into the killings, the UN mission in the country said.

The government has said some 300 people, almost all civilians, died in the massacre in North Kivu province on November 29-30.

The group has denied any responsibility, blaming "stray bullets" for the deaths of just eight civilians.

In a statement issued overnight Wednesday, the UN's MONUSCO peacekeeping mission said investigators found 131 people had died, killed "as part of reprisals against the civilian population."

The evidence comes from witnesses and other sources as investigators were unable to reach the villages where the massacre took place, which means the toll "could change," MONUSCO warned.

"Eight people were wounded by bullets and 60 others kidnapped. At least 22 women and five girls were raped," it said.

"This violence was carried out as part of a campaign of murders, rapes, kidnappings and looting against two villages in Rutshuru territory as reprisals for the clashes between the M23" and other armed groups, the statement said.

The probe, carried out by the UN Joint Human Rights Office (UNJHRO) and MONUSCO, centred on events in the neighbouring villages of Kishishe and Bambo.

Investigators could not go to the villages themselves because of security concerns, but interviewed 52 victims, witnesses and other sources in the town of Rwindi 20 kilometres (12 miles) away, MONUSCO said.

"Kishishe at the moment is controlled by the M23 and (there is) a high risk of reprisals against victims and witnesses who are still in the area," it said.

Eastern Democratic Republic of Congo (DRC) has been restive for years.

Dozens of militias operate in the region, many of them legacies of two regional wars that raged at the end of the last century.

The M23, a mostly Congolese Tutsi group, resumed fighting in late 2021 after lying dormant for years.

It claimed among other things that the DRC had failed to honour a pledge to integrate its fighters into the army.

Map showing the location of Kishishe and Bambo in eastern Democratic Republic of the Congo, where at least 131 people were killed in a massacre by M23 rebels on November 29-30, according to preliminary findings by a UN mission. By Valentin RAKOVSKY (AFP)

The group then went on the offensive, advancing towards the city of Goma and causing tens of thousands of people to flee.

The group's political spokesman, Lawrence Kanyuka, lashed the UN report as a sham.

"It's regrettable to see a respectable organisation... compile a report that has been completely fabricated," he said. "We are staggered."

Kanyuka said the group had told MONUSCO "several times that it could come" to Kishishe to carry out its investigation.

Instead, he charged, MONUSCO "went and did an investigation 20 kilometres away... and decided to bring out a report which supports the accusations of the Congolese government -- this shows its bias."

Local inhabitants who spoke to AFP last week recounted that the rebels had pressed them into burying victims at Kishishe in mass graves.

In its statement, MONUSCO said M23 members "reportedly buried victims' bodies themselves, in would may be an attempt to destroy evidence."

The M23 crisis has led to a surge in tensions between the DRC and neighbouring Rwanda, which Kinshasa accuses of backing the group.

Rebecca Nzengi, 22, is one of the thousands of victims of the fighting -- she is being treated at a hospital in Goma for a machete wound to the head. By ALEXIS HUGUET (AFP)

One of those groups, it said, was the Democratic Forces for the Liberation of Rwanda (FDLR) -- a former Rwandan Hutu rebel group established in the DRC after the genocide of the Tutsi community in 1994.

Despite the friction, the two countries last month agreed on a ceasefire in the region, scheduled to take effect on November 25 and followed by an M23 pullout two days later, something that did not happen.

The truce applied to government forces and the M23, not to local armed groups, some of which have also been fighting the rebels.

One of the groups named in the UN report was the FDLR.

On Tuesday the M23 said it would "maintain" the ceasefire "even though it was not represented" at the peace talks, held in the Angolan capital of Luanda. It also said it was "willing to start to disengage and withdraw."