Fish prices to go up over premix fuel scarcity 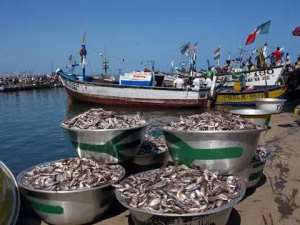 The public will have to pay more for fish following the scarcity of premix fuel at the various landing beaches along the coast.

This is because the Ghana National Canoe Fishermen Council has said, fisherfolk are left with no option than to transfer the high cost of fuel they buy to the consumer.

Fishermen in recent times have raised concerns over the shortage of the product, saying, the situation is having a toll on their operations.

For them, they are compelled to purchase fuel meant for vehicles at exorbitant prices anytime they want to embark on fishing expeditions.

“We all know what the petroleum hikes come along with. Prices of everything surge. In time past, you could get a pan of fish for about GH¢400 and GH¢500, but now it’s about GH¢1000. Whatever price we buy fuel to embark on an expedition, the customer will have to pay for it because we will transfer the cost to the consumer.”

Meanwhile, the agitated fisherfolk have threatened to embark on a massive demonstration, following their inability to access premix fuel to power their outboard motors for some months.

The incensed fishermen say they will soon hit the streets to press home their demands until the shortage of premix fuel is resolved by the government.

“In actual fact, we were not planning a demonstration but, listening to the feedback, the signals and the vibes from the various regions, they are asking leadership to allow them to embark on the demonstration. The fishermen are getting agitated day in and day out. Fisherfolk in Volta, Western, Central regions are calling for the demonstration, the pressure is mounting”, Jojo Solomon added.

He bemoaned the suffering the fishermen are going through, adding that majority of them have fallen out of business.

“It's been four months without premix fuel. The premix is not there, we are buying from the regular pumps which are very expensive. The few canoe owners who are able to afford fall out with huge debts here and there, and it's a source of worry. Now we are getting fish, but there's no premix,” he said on the show.

He called for an audience with President Akufo-Addo to find lasting solutions to the shortage of premix fuel, stressing that the issue is now beyond the powers of the Minister of Fisheries and Aquaculture Development, Madam Mavis Hawa Koomson.