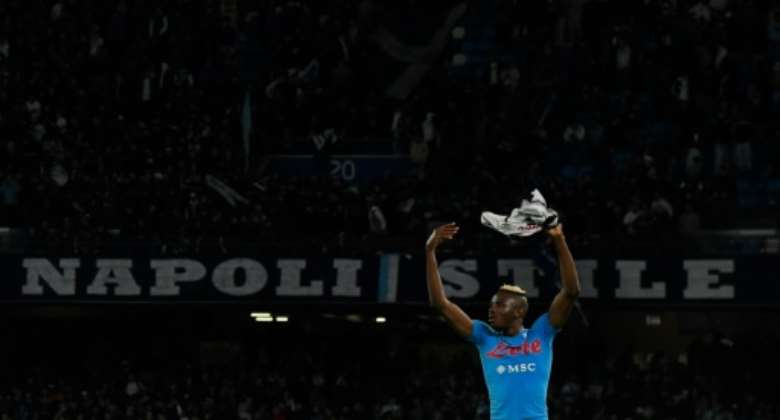 Napoli forward Victor Osimhen has been in superlative form but his Nigeria side will be missing from the World Cup. By Tiziana FABI (AFP)

Nigerians are facing up to the reality of not qualifying for the World Cup, which kicks off Sunday in Qatar, as the African football giants have to watch from the sidelines the countdown to the quadrennial global showpiece.

Fans of the Super Eagles -- the Nigeria football team's nickname -- have brought colour, celebration and drama with their drums, trumpets and costumes at six previous World Cups where their team featured.

In March, perennial rivals Ghana eliminated Nigeria in a World Cup play-off on the away goals' rule after the first leg finished 0-0 in Ghana before a 1-1 draw in Abuja.

"It's now a reality, a bad dream, that we will not be at the World Cup," said Segun Olayinka, a fan based in Nigeria's commercial capital of Lagos.

"Our best players like Victor Osimhen and Wilfred Ndidi have been doing great at their clubs in Europe, but now they can only watch the World Cup on television, just like me."

Nigeria's German coach Gernot Rohr was sacked midway through the World Cup qualifiers and the coach said his firing was partly to blame for the team's failure.

He said the then-president of Nigeria Football Federation, Amaju Pinnick, had claimed his dismissal was to avert disaster.

"But in the end he created the disaster that cost Nigeria the ticket to the World Cup," Rohr said.

"I regret that I did not take my team to win the World Cup, I regret my players will not be at the World Cup even though they deserve to be there."

The closest the Super Eagles will come to be associated with the World Cup will be Thursday in Lisbon, where they take on Portugal in a final warm-up game for the home team before they fly out to Qatar.

"We're a big football nation and the players are all disappointed they will not be going to the World Cup,' said team spokesman Baba Femi Raji.

"We now have to look ahead and this high-profile match is one of the ways we are already doing so."

Terem Moffi, who plays for French club Lorient, told AFP every player dreams of playing on the biggest stage.

"It would have been great being at the World Cup because many of us are doing well at our clubs," he said.

"But since we didn't qualify, that does not count for much now."

Will Nigerian fans now switch their support to "Old Enemy" Ghana, a neighbouring West African country, one of five teams from the continent who qualified.

Ghana are drawn in a tough-looking group that has Portugal, Korea and Uruguay, the team who stopped them in 2010 from becoming the first African team to reach the semi-finals of the World Cup.

Since qualification at the expense of Nigeria, they have strengthened their squad with the likes of Mohammed Salisu and Tariq Lamptey from the Premier League as well as Spain-based forward Inaki Williams.

Some Nigerian fans said they will most likely be cheering other teams to victory because of the long-standing rivalry between the two west African states.

Many Nigerians are devoted followers of the English Premier League as well as Spain's La Liga.

Brazil's squad has as many as 11 players from the Premier League.

Club allegiance could see Nigerian fans rooting for Gabriel Martinelli and Gabriel Jesus because they also support Arsenal or Vinicius Junior because of Real Madrid.

England could benefit from support as well and they also have Bukayo Saka, who has Nigerian roots.

The parents of the Arsenal forward are Nigerian, but there are still many Nigerian fans who have not forgiven him for opting to play for England instead of the Super Eagles.